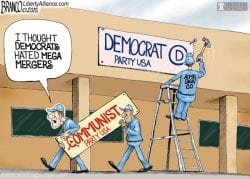 How many times have you heard the comment, “US Media is dead and/or irrelevant?”

Well, after the Ohio and Texas mass shootings, no sane person will ever have to wonder about Democrat + Media insanity. It is now disgustingly on display for the world to see.

What remains shocking is they act like their insanity is reality. Meanwhile, it is now obvious they don’t give a tinker’s damn about these people. It’s so disingenuous because this is the way Democrats raise money.

Imagine working for a Democrat that moves you to a new position and tells you to toss rotten eggs at certain people passing by your store. The boss explains the reward is the payment of $10 for every person hit. How many people would you hit?

The decision isn’t about how much money you’ll want to make to optimize this financial opportunity. No, it’s only about the status of one’s morality, right?

If one has an ounce of integrity, they would return the eggs, refuse the job assignment, and announce they will no longer work for an idiot. Yes, there is an immediate financial loss, but God will bless people that stand for Godliness and reward them in other ways.

Unfortunately, this is sound critical data no Democrat or Media personality can imagine – much less digest. For Democrats + Media, money is everything since it is always about increasing their political power. How they get the money is insignificant.

For more than 2 years, Democrats have accused and prosecuted President Trump as a racist, sexist, homophobe, Russian spy, and stooge for Putin. All are nothing but proven lies, but they have no conscious and could care less how they harm people and their families.

Democrat + Media talking points never consider fact and truth. All that matters is… how much money can they raise!

The recent mass shootings prove beyond any shadow of a doubt that Democrats + Media have no moral compass. Regardless, truth is difficult to contain, and it eventually slips through the fog.

We are now learning the Ohio shooter is a major active Democrat operative obeying instruction from their Party rhetoric. What will we eventually learn about the El Paso shooter?

Even more insightful is the Democrats demanding President Trump not to go to El Paso to meet with the mass shooting victim families, those remaining hospitalized, family members, friends, and public officials. You see, having someone sane who truly is concerned and cares about people destroys their talking points.

Democrats + Media need to remember the wise saying, “Better to be thought of a fool than to speak and remove all doubt!” After President Trump leaves these two cities today, people will see the Democrats + Media as the fools they really are.

Imagine the arrogance it takes to make any attempt to tell the President of the United States where he can and can’t travel! Understanding they want to do this to our President while they are “out of power,” imagine what it would be like for you and me if they should get into power.

It’s only more insight into the phony fake agendas driven by the lying Democrats and their sycophant media partners. No, they have no shame or character and no stomach for Godliness.

Jeremiah 6:15-19 Were they ashamed when they had committed abomination? nay, they were not at all ashamed, neither could they blush (appear apologetic): therefore they shall fall among them that fall (ungodly people): at the time that I visit them they shall be cast down (fall from fame and fortunes), saith the LORD.

Thus saith the LORD, Stand ye in the ways (streets), and see, and ask for the old paths (God’s word), where is the good way, and walk therein, and ye shall find rest for your souls. But they said, We will not walk therein. Also I set watchmen over you, saying, Hearken to the sound of the trumpet (call to worship). But they said, We will not hearken.

Therefore hear, ye nations, and know, O congregation, what is among them. Hear, O earth: behold, I will bring evil upon this people, even the fruit of their thoughts (everything they are involved in), because they have not hearkened unto my words, nor to my law, but rejected it.