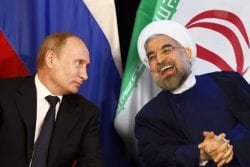 Should anyone believe Iran’s shooting down a US Warplane is accidental? Maybe it’s plausible but is it realistic? Shouldn’t we dig into more facts about US/Iranian relationships prior to President Trump?

Former President Obama and Secretary of State John Kerry’s cozy relationship with Iran is irrefutable. Does their love fest for one another remain a perilous relationship for America?

Toss in their hatred for Donald Trump and ask if it has any influence on their Iranian personal relations? If so, could they be attempting to stir up a military crisis to embarrass and harm President Trump?

Please keep in mind the source for the Russia Collusion Delusion hoax is slowly leading to the State Department and the Oval Office. They can’t help but feel the pressure from Attorney General Barr. If their backs are against the wall, what do they have to lose?

Could anyone successfully defend their anti-American actions while in office? Should we accept the reality that both Obama and Kerry built their careers and popularity by using falsehoods and deceit? Fortunately, everyone is innocent until proven guilty but that doesn’t mean we stop asking questions, right?

Is there anyone able to refute President Obama hatred for America?  Oh yes, let’s not forget how badly John Kerry hates the US Military and conducts private meetings with Iran.

The Mueller Report debunked the Trump/Russia collusion hoax used to mislead Americans leaving little doubt the actions taken by President Obama were treasonous. So, if they are behind the Iranian plane downing, what’s a little more treason?

Isn’t it logical to believe if anyone is willing to disregard their oath of office, they would also be willing to be unfaithful to America in other ways?

Doesn’t the plot thicken when Nancy Pelosi and Chuck Schumer are tossed into the storm? Can anyone imagine anything these two wouldn’t do to create problems for President Trump?

Let’s finally understand… their Russia hoax failed, their Special Counsel hoax failed, and now their attempt to re-do the Mueller report is falling apart. Congressional hearings are being turned into clown shows not only being disrespectful of taxpayers but embarrassing everyone – even Democrats.

As it has been since his election, President Trump is being attacked by all sorts of people and groups from the north, south, east, and west. The last thing President Trump wants is another middle east war after pledging to stay out of them, but he has few allies and probably fewer options with Iran.

At this point, the only big question remaining is when we turn on the Weather Channel, will the reporter explain this storm has dissolved or is it building steam and hitting land fall in X number of hours? Regardless, God always has perfect solutions…

1 Chronicles 28:20 And David said to Solomon his son, Be strong and of good courage, and do it: fear not, nor be dismayed: for the LORD God, even my God, will be with thee; he will not fail thee, nor forsake thee, until thou hast finished all the work for the service of the house of the LORD. Psalms 55:16-23 As for me, I will call upon God; and the LORD shall save me. Evening, and morning, and at noon, will I pray, and cry aloud: and he shall hear my voice. He hath delivered my soul in peace from the battle that was against me: for there were many with me. God shall hear, and afflict them, even he that abideth of old. Selah. Because they have no changes, therefore they fear not God. He hath put forth his hands against such as be at peace with him: he hath broken his covenant. The words of his mouth were smoother than butter, but war was in his heart: his words were softer than oil, yet were they drawn swords. Cast thy burden upon the LORD, and he shall sustain thee: he shall never suffer the righteous to be moved. But thou, O God, shalt bring them down into the pit of destruction: bloody and deceitful men shall not live out half their days; but I will trust in thee.

Please keep President Trump in prayer as well as his families and those supporting him. Please ask God to watch over troops or others involved and give them wisdom, strength, and confidence.

Likewise, for those not acting in the best interests of America, we must pray they would either get with God’s plan or be eliminated from this earth. No matter how evil these people might be, God has a perfect plan for their lives, also.