Congresswoman Ilhan Omar was confronted over her attacks and libelous smears against the Covington Catholic kids and she doubled down on her lies about the kids as Nick Sandmann’s lawyers notify her and many others of an incoming libel lawsuit they will face.

She said, “The message I would have for them is in life there are consequences for the way that you behave. I feel sorry for the way that some of them have gotten blame and hurt. But I also recognize that in the way that the video appeared that there was a native elder who was intervening and really showing care for what it looked like to mediate a difficult situation. And I wanted to hold him in space in my heart and to have a conversation on what hate, division, in this country looks like. That is often capitulated by the inhabitor of the White House.”

Ilhan Omar had to delete her tweet where she slandered the Covington kids saying they said “its not rape if you enjoyed it” that fact was debunked the day that smear came out. Even the lady who shared that video admitted she didn’t know if it was them but it didn’t matter. She defended the SPLC designated hate group The Black Hebrew Israelites who called these TEENAGERS “incest babies”, “child molesters”, “fa**ots, and so many other heinous names. At least she isn’t defending militant Islamist terrorists like Hamas who routinely shoot rockets into Israel, who teach children and others how to stab Jews, and so many other heinous crimes that have been shown to be very detrimental to the cause of the 2 state solution. Stolen Valor Nathan Phillips went up to confront the kids banging his drum in Nick Sandmann’s face. Sandmann’s family hired a PR firm to defend their kid from libelous smears from a radical left who wants to kill this in a way so violent it resembles what was done to Khashoggi. 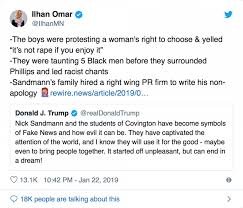 For the first time in Ilhan Omar’s life, she will be facing consequences as her comments continue to strengthen the libel cases both from Robert Barnes, and L. Lin Wood and his team of lawyers. Enjoy the consequences Ilhan (I married my brother to defraud the US immigration system but don’t think too hard about that) Omar.