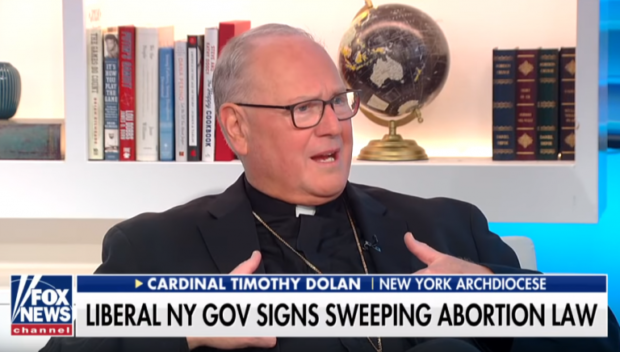 In an interview presented this morning on FOX News Channel’s (FNC) FOX & Friends, Cardinal Timothy Dolan, the Archbishop of New York, reacted to Governor Andrew Cuomo (D-NY) signing and publicly celebrating the passage of an abortion bill that legalizes abortion up until the point of birth.

New York’s Governor Cuomo, a Catholic, signed the abortion bill into law last week. The law allows pregnant mothers to kill their babies up until the moment of birth, closing the gap between abortion and murder to mere minutes.

“Ghoulish, grisly, gruesome – these are the words that people, independent observers are using about this so-called reproductive health act,” Dolan said. “The fact that he’s a Catholic as far as I’m concerned has nothing to do with it. Any thinking human being that would want a baby, allow a baby to be aborted right up to the moment of birth – any thinking, thoughtful considered human being that would think that a baby could be – the abortion procedure to go forward without proper medical care since now doctors don’t have to be there – anybody that thinks a baby who survives the gruesome abortion procedure and that a doctor is no longer required to attempt to save that baby’s life – you don’t have to be a Catholic to abhor those types of things.”

The Cardinal also lambasted Cuomo for his ill-conceived notion of progressivism.

Dolan has received “wheelbarrows of letters” each week demanding the excommunication of Governor Cuomo, but he doesn’t think that’s the best course of action.

“We would be giving ammo to our enemies who say this is an internal Catholic disciplinary matter. This is really not civil rights – this is really not biology. These Catholics don’t have freedom when it comes to this,” he said

Cuomo uses his disagreements with Catholic Church policy as a sort of badge of honor but Dolan shied away from denying Cuomo communion.

Governor Cuomo relishes the criticism from the church: ““He likes this. He likes being the pecks bad boy when it comes to the Catholic Church.”

Support Conservative Daily News with a small donation via Paypal or credit card that will go towards supporting the news and commentary you've come to appreciate.
Tags
abortion Cardinal Dolan New York