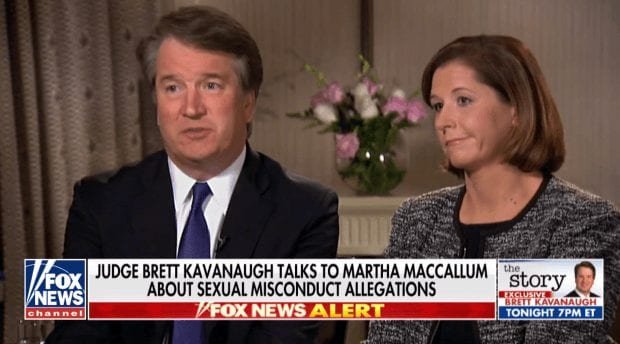 During the interview, Judge Kavanaugh addressed the allegations of sexual misconduct he is facing including, the new accusation from his former Yale classmate Deborah Ramirez who came forward over the weekend. He also addressed the upcoming hearing on Thursday in which one of his accusers, Dr. Christine Blasey Ford, will testify in front of the Senate Judiciary Committee, and the effect these claims have had on his family.

Additionally, Judge Kavanaugh’s wife, Ashley Estes Kavanaugh, spoke publicly for the first time about the allegations that her husband is facing.

Ford and Ramirez have hurled allegations against Kavanaugh that have repeatedly failed to maintain credibility. Witnesses they named have either failed to materialize or have rebutted the women’s stories. The New York Times decided not to publish Ramirez’s account after interviewing dozens of people and finding no one that could corroborate her story. Ford’s named witnesses have all either supported Kavanaugh’s side of the story, rebutted her account or both.

The interview is the first since Ford and Ramirez have made their allegations public. Neither has bothered to file a police report or provide any evidence about the alleged incidents.

Both Ford and Kavanaugh have agreed to testify to the Senate Judiciary Committee on Thursday.

Support Conservative Daily News with a small donation via Paypal or credit card that will go towards supporting the news and commentary you've come to appreciate.
Tags
Brett Kavanaugh Fox News Martha MacCallum