I’m not sure if her handlers took Saturday off or if Hillary Clinton just slipped away from them during one of her walks in the woods, but something clearly went wrong when Mrs. Clinton showed up at a neoliberal arts festival on Saturday.

Literally looking like she just rolled out of bed, Hillary took the stage at Ozyfest, held in New York City’s Central Park Saturday, in what appears to be a nightgown, house shoes, little-to-no-makeup and barely-touched hair. 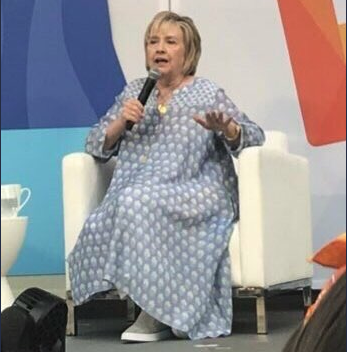 “Why didn’t he stand up for our country?” Clinton asked. “In this case, it doesn’t seem like our president cares.”

But afterward, social media focused on just one thing – her wardrobe.

I was so distressed by the garment that I just noticed the shoes.