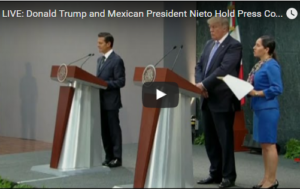 Donald Trump spent the day moving between a fundraiser, meeting with a foreign leader, a joint press conference and finally another massive rally all while Hillary Clinton had exactly one on her schedule but not too many showed up to listen to her.

While Trump worked for his party, sought to work out differences with Mexican leadership and help his voters understand his immigration policy, Hillary Clinton did precisely nothing other than to complain about Trump doing all of those typically presidential tasks.

The rally in Phoenix, Arizona was another well-attended event in a large venue. The convention center has a 4,200  person capacity and was “packed” according to CBS5 News. The event was also watched through live streaming by more than an estimated 60,000 people.

Hillary pulls in hundreds while Trump talks to thousands and 10’s of thousands more watch online! 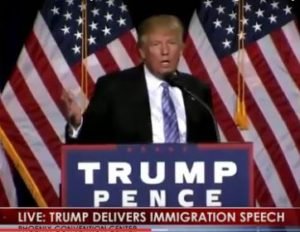 The speech Donald gave was concise, informative and direct. Trump differentiated himself from the Obama/Hillary policy and outlined a clear plan to fix the immigration woes in America – it was extremely well-received by the crowd.

The GOP nominee for president talked about how our current immigration system works for establishment politicians, but hurts everyday Americans.

The Democrats exploit illegal immigrants as a voting block while establishment Republicans view them as cheap labor for their rich constituents.