I cannot even imagine the agenda being considered by both sides, but Donald Trump has accepted Mexican President Enrique Pena Nieto’s invite to meet.

Peña Nieto invited both Trump and Democratic presidential nominee Hillary Clinton to visit Mexico last Friday, his office said in a statement provided to The Washington Post on Tuesday night. Although no meetings have been confirmed, the statement said, both campaigns received the invitations “on good terms.”

Trump, sensing an opportunity, decided over the weekend to accept the invitation and push for a visit this week, according to the people familiar with the discussions.

Oh… what will they talk about?

The wall? Trump has strongly stated that he intends to build a “beautiful wall” along the southern border and force Mexico to pay for it. Mexico’s leadership has said that they are both unable and unwilling to pay for such a thing.

NAFTA? Trump is looking to renegotiate just about every trade agreement currently in-force with the United States. Mexico could stand to lose much if NAFTA becomes a truly fair agreement.

Immigration? Mexico benefits from more than $25 billion annually in remittances from immigrants in the United States. If all those immigrants are sent home, a huge inflow of American greenbacks could be shut off. 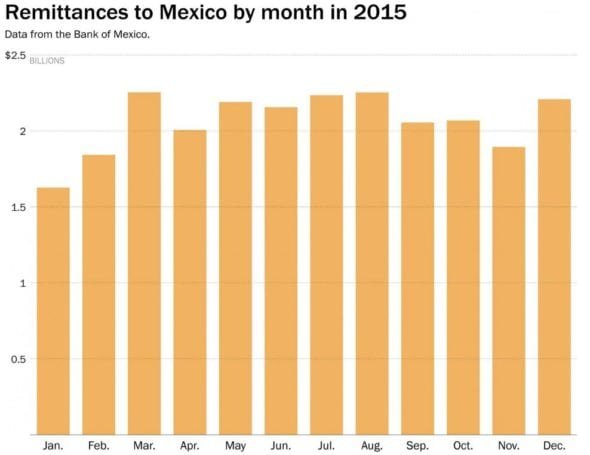 Trump’s memo to The Post asserts that Mexico receives “approximately $24 billion a year in remittances from Mexican nationals working in the United States” and that “the majority of that amount comes from illegal aliens.” It’s hard to evaluate that claim, but Pew’s 2013 report suggests that it’s likely to be true.

Trump has a difficult schedule on Wednesday, so how will he squeeze in the Mexican President?

Trump is scheduled to hold fundraisers Wednesday morning in California and deliver his immigration speech in the evening at the Phoenix Convention Center. His trip to Mexico, should it occur, would come between his events.

It looks like Trump’s doctor was correct in saying that he is in excellent physical condition because Donald has confirmed the meet on twitter despite his incredibly full schedule:

I have accepted the invitation of President Enrique Pena Nieto, of Mexico, and look very much forward to meeting him tomorrow.

If two-source confirmation were needed, here it is:

Hillary Clinton hasn’t accepted, commented or even hinted that she is considering accepting. Nap time slows things down I suppose.

The real question is why would Donald bother with this meeting? First, he will appear measured, reasonable and presidential by meeting with the leader of a foreign nation and discussing difficult issues. Second, he needs minority votes to help him with the large population centers in Ohio, Pennsylvania, North Carolina, Florida and New Mexico – places where considerable concentrations of Mexican immigrants reside.

If Trump is going to fix the awful electoral map he is now facing, the black community and hispanic voting bloc may be required to push him over the edge. A fact his campaign seems to now readily accept as Trump will be meeting with the black community in Detroit on Saturday and now the leader of Mexico tomorrow.