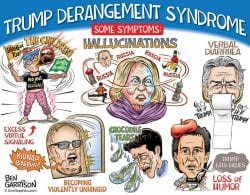 Please consider most Nations facing any health crisis quickly alerts citizens and institutes ways to confront, confine, and minimize damage. In this instance, we must question why TDS has not risen to that crisis level in the eyes of the President and US Health officials.

If America fails to admit and address our own health crisis, how can we legitimately address health issues with other countries? At least, most countries don’t attempt a cover-up or fail to admit there is a health problem, right?

Meanwhile, TDS continues to spread from top FBI officials to infect top government officials and almost every member of the Democrat Party, media, and Never Trumpers.

Psychiatrists agree the core issue associated with TDS, is a menacing destructive mental attitude capable of destroying families – if not properly treated. Many, further agree TDS can be even more frightening than illegal drugs, alcohol, bullying, arrogance, and other mental health illnesses.

To date, America has not only failed to acknowledge this health crisis, but no plans have been put forth to address and care for those affected. We must all question why the President, Congress, and US Health Officials prefer to maintain secrecy about this highly infectious health issue!

Surely America is better than this and we must immediately institute action plans to a) stop the spread of this terrifying illness, and b) treat and care for those diagnosed with TDS. Then we must expose the dangers of this mental health disease to other countries so they might prepare for the spreading of the disease.

TDS’s health issues require inspection from various lenses since it seems to attack people in so many various ways. Since many professionals express the disease has characteristics of the “fight or flight” syndromes, it should be treated as an auto-immune disease since it triggers people’s emotions.

Just as we have terrorist alerts, why can’t Government agencies issue warning levels as the disease progresses across America? Daily updates on the spread of this disease would help professional health providers prepare action plans.

Why isn’t State and Federal Government Agencies offering treatment centers for those affected? Why can’t we quarantine those geographical areas so heavily infected in an attempt to limit spreading?

Does anyone have the audacity to believe avoiding these discussions and sweeping the issue under the rug will make anything better? If so, why can’t we apply this philosophy to paranoia, schizophrenia, Ebola, corona virus, alcoholism, measles, domestic violence, rape, harassment, bullying, and the like?

Meanwhile, we are watching Democrats, Never Trumpers, and the news media spread the disease across America. Each day, we see more infections leaving people totally out of control and unable to control their emotions or accept facts.

On the surface, TDS infections are expressed by those that accept, approve, and applaud lying and liars. Lord knows the media exposes this portion of the issue minute-by-minute, right. We notice Democrats and the Never Trumpers frequently running to their Congressional Safe Spaces to lie, lie, and lie so Congressional legislation protects them from prosecution or held liable.

The TDS infections eventually peaked among Democrats after shouting, “If we don’t impeach Donald Trump immediately; mountains will fall, fish will leave the oceans to eat us, financial markets will collapse, vehicles will randomly run over pedestrians, and our Constitution will be destroyed!”

Yes, we know it has reached critical stages when the Democrat Global Warming Hoax is now in second place to TDS. Regardless, Democrats never fail to let everyone know either of these two mental illnesses will destroy the planet.

However, if we only pull our heads out, it’s so easy to see America under President Trump has never been better. There’s not sufficient room within any article or news break to emphasize all of the many accomplishments this President has achieved for every American, within only a few short months in office.

Therefore, it behooves all to question why only those opposing President Trump are victims of some sort of discrimination plot. Meanwhile, most Americans are prospering like no other time in our history! How can it be possible for only Democrats to feel so disenfranchised? Then again, perhaps we must assume it is just more lies and anti-American propaganda?

People infected with TDS have no shame or moral compass. It’s all about money and power – at any cost. Democrats have now seen fit to adopt leaders from Iran over President Trump to promote their mantra, “Death to America!” Then Joe Biden, Democrat Presidential Candidate, tells us illegal immigrants are more American than citizens are.

Again, if we listen to Democrats, America is in bad shape because President Trump is a racist, homophobe, climate change denier, and doesn’t want America to get involved in endless Middle East war! If they are so certain, why can’t they produce the proof he is bad for America.

Deranged TDS infected Democrats really believe taxpayers owe them their livelihood. You see, they pass legislation for only one purpose, to ‘scam’ taxpayer money. For Democrats ‘work’ is a four-letter word. Therefore, they aren’t looking for jobs or earning money the ‘old fashion’ way, they just want to create shell games and rule.

Regardless of the legislation, the Dems do their magic so the lion’s share ends up in their bank accounts. After all, when one leaves the public sector to enter government to get rich, shouldn’t they become suspect?

You’ll then understand when the new Sherriff, President Trump, came to Washington DC with a promise to ‘drain the swamp’, such news had to be more frightening to government employees, lobbyists, Democrats, and the Never Trumpers than any horror ever imagined.

After serving in government for most of their lives, Swamp Dwellers eventually have the opportunity to cash in on wealth schemes like those before them. Suddenly, it dawns upon them their ‘illegal retirement plans’ have been threatened and possibly denied.

It’s the other side of the TDS issues people fail to grasp. Imagine being on a desert sand doom with the sun beating down watching the last canteen of water evaporate right before our eyes. After all, the Democrats, media, and Never Trumpers have lied, cheated, and corrupted everything touched to get to this point in their lives.

Now, the well is going dry, accountability is being implemented, and the DOJ is ordered to investigate all of their schemes and crimes – just when things were going so very well for them!

The money, sex, and drugs normally flowing freely at every Washington DC gathering is no longer public knowledge. Transparency and Godliness is now in the forefront while sin is moving into the closet, once again. Yep, President Trump has ushered in an era that has no place in Washington DC, right?

For those infected with TDS, their new priority is to hate everything America! They want an America where those who burn and demean our flag and Constitution are heroes while police and military personnel defending America are the scum of the earth.

Imagine the seriousness of their feelings and conversations when they realized the new Sherriff was neither corruptible nor willing to participate in their sinister schemes against America’s taxpayers. Imagine what they must have felt like when President Trump announced his efforts would focus upon making America great again.

Suddenly with billions of dollars at risk for the members of the DC Swamp, they falsely accuse the new Sherriff of every sort of evil known to humanity! They falsely believed their strength in numbers would override American opinion and sway voters to reject the 2016 election and remove President Trump from the 2020 ballots. Facts are a stubborn thing and the truths began dribbling into the public arena signing their political death certificates.

Consider the Democrat’s Russia and Ukraine false accusations as an example. While they know with certainty Donald Trump had nothing to do with these faux issues, they couldn’t help themselves so they fall to even lower levels of corruption to use taxpayer money in an attempt to hold hearings and impeach this President.

The one thing we did learn from all of the taxpayer-funded investigations is the Democrats were up to their necks in Russia and Ukraine corruption. Russia provided the dossier while China and Ukraine provided the anti-Trump talking points and millions in kickbacks.

Yep, the investigations and hearings show how corrupt, dirty, and desperate anti-Trumpers have become. They want to slay their opposition with false accusations but it’s no longer working!

The Kavanaugh Hearings taught us well – false accusations, no proof, just lie after lie. Now, after the impeachment has begun, there will be a parade of people like Ballsie Ford, declaring they too had unprotected sex with President Trump in Ukraine. Who knows, there may even be a Ukraine Dossier paid for by Hillary Clinton!

That’s why the Trump Deranged Syndrome is alive and well in Washington DC – just when everything was going so well for the Swamp Dwellers! Voters must begin actions to address the TDS issues that are destroying America. Just pull the lever for Republicans and relax!

Support Conservative Daily News with a small donation via Paypal or credit card that will go towards supporting the news and commentary you've come to appreciate.
Tags
Democrats Donald Trump Trump derangement syndrome