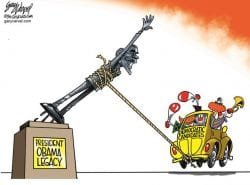 I am so happy that President Obama is not deceased and flipping in his grave. Instead, he is alive, well, and in person witnessing the final nail in his shamed Presidency – not by Republicans but fellow Dems!

Of course, the worst is yet to follow as we will soon learn Obama is a racist, sexist, homophobe. As I have stated so many times, there are no longer any adults in the Dem Party. It’s all about taking no prisoners.

Next, we must now be prepared for the Dems to go after Michelle for her tawdry clothes, shoes, and hair dos. Yes, she might also be placed in the good company of those branded as racist, sexist, and homophobes.

After the Obama’s are shamed and branded as a part of the pro-America problem, then who becomes their next victim? After all, the Dems have no ‘positive’ message supporting US Citizens and since the Trump/Russia story crashed and burned, they are forced to find other targets to attack.

The larger target for Dems is and always has been the US Constitution, liberty, and freedom. Unfortunately, the “New Green Deal” specifically designed to destroy America, spitted and sputtered out of the blocks and is now being treated as a bad joke.

None-the-less, Dems continue every possible attempt to ‘scare’ Americans into voting for them instead of offering good reasons. Each time any of the Dem Presidential hopefuls speak, we all nervously await their next terrifying story, lie, and disguised plan to destroy America’s greatness, as previously done in every country succumbed to their decadent ways of life.

Trying to figure out the new Socialist Democrat Party is like ‘pushing’ a rope, right? Just when we think we understand them, oops off they go in a different direction.

The reality of the Dem party is understanding the Trump/Russia collusion lie wouldn’t make a spec on what is happening with the Democrat/Russia collusion story. The Russians must be holding celebratory parties every hour in Moscow.

Seriously, if you were a high ranking official in Russia, could you come up with a better plan to destroy America than today’s Socialist Democrats? Imagine the fact they don’t even have to spend a dime or send people to America to destroy liberty and freedom!

If anyone should doubt these words, please consider being in a meeting with any of the current Presidential Socialist Democrats with any world leader. Who wins? Would any foreign leaders take them seriously? Laughable, right?

With the Socialist Dem platform of open borders, all of America’s enemies would be sending massive terrorist organizations to physically take over every American city. Of course, it is now obvious to most they have already taken over cities like San Francisco, Los Angeles, Baltimore, and others without firing a single shot.

Not to be outdone by only open borders, they also want to invite the world’s sickest people to come to America and allow US Citizens pay for their health care. Yes, that really seems stupid for most people with a brain, but for Socialist Dems, it just means increasing government and gaining more and more power over the world’s populations.

Socialist Democrats see how other socialist countries have eradicated worshipping God and that is their number one goal. Without God being a part of the conversation, their edicts and mandates cannot be resisted. It’s their way or the death chamber!

Mark 12:38-41 And he (Jesus) said unto them (all) in his doctrine, Beware of the scribes (Politicians or legalists), which love to go (parade) in long clothing (elites), and love salutations (speaking their words) in the marketplaces (public), And the chief seats in the synagogues (congress), and the uppermost rooms at feasts (private parties): Which devour widows’ houses (the poor), and for a pretence (attempting to fool the public) make long prayers (not to God but to only hear their words presuming they know better what’s best): these shall receive greater damnation.