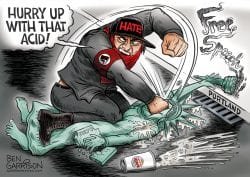 Most Americans love and devote their efforts toward improving America. But, I have never read or heard as many bogus stories and out-right lies at any time during my lifetime, until now. It’s insanity!

No longer any doubt why President Trump routinely yells, “Fake news!” We see many stories unintentionally misrepresented, but I have never seen so many ‘planted’ (fake) stories.

This is the new Democrat Party and accomplices support system developed to change votes on behalf of one candidate – generally a Democrat, over another – generally a Republican. It’s a very sad thing for citizens that loves America.

Can you imagine how many Americans fought and died so citizens can vote? Voting is a sacred honor not a blood sport, right? Falsifying or voting fraud must be a national emergency.

Imagine the dismay discovering there are no lengthy trails on the Internet about all the accomplishments of the Republican Party led by President Trump. How can this be?

Shouldn’t we believe if Democrats had accomplished 1/4th as much as President Trump, the Internet would be wall to wall Democrat achievements? Just think what miracles he has done for minorities, the poor, business, savings, elderly, and the forgotten Americans!

Excluding Satan, I believe goodness can be found in almost anyone. Even President Obama had some good points, right? Shouldn’t everyone try to find more good than bad in the world?

Now, that’s not to suggest a little good, excuses or diminishes evil. It doesn’t! However, as Christians, we are mandated to search for the good in all things…

Philippians 4:9-11 Those things, which ye have learned, received, heard, and seen in me, do (live your lives as unto the Lord): and the God of peace (the giver of a relaxed mental attitude about everything) shall be with you. But I rejoiced in the Lord greatly, that now at the last (once again renewed) your care of me hath flourished again; wherein ye were also careful (concerned), but ye lacked opportunity. Not that I speak in respect of want (in need): for I have learned, in whatsoever state I am, therewith to be content (accept and give thanks to God).

1 Corinthians 2-9 But as it is written, Eye hath not seen, nor ear heard, neither have entered into the heart of man, the things (millions of blessings) which God hath prepared for them that love him.

Anyone in charge of newsrooms, search engines, or whatever that are so vicious and can’t report anything decent, must find a more meaningful career! Insanity can’t be tolerated or elevated!

Failure to present the ‘whole’ story or slant the facts is not an acceptable profession. That’s called a propagandist and that’s what is done in Communist and Socialist countries where Tyrants rule.

What would you call a law enforcement officer that arrests someone at midnight, explaining they “think” you just robbed a bank? That’s not a professional but a member of a gulag, right?

Professionals are always separated from non-professionals by the way we think and act. Any degree either left or right from our course creates contentions. Professional careers have been ended instantly by getting off course.

America must forever remain strong and there is only one possible solution and that is to reelect President Trump. Next, we must come together to destroy domestic terrorism starting with media outlets, internet companies, and Democrat Socialism.

1 John 2:15-17 Love not the world (things, earthliness), neither the things that are in the world (even riches). If any man love the world (more than God), the love of the Father is not in him (we can’t make anything more important than God). For all that is in the world, the lust of the flesh, and the lust of the eyes, and the pride (positions) of life, is not of the Father, but is of the world (Satan is the ruler of the earth). And the world passeth away (will be destroyed by God), and the lust thereof: but he that doeth the will of God abideth for ever (has eternal life and blessings).