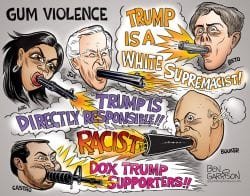 Can anyone imagine what these wounded Democrats are thinking, today? After almost three years of claiming the moral high ground and obedience to nothing short of absolute greatness and honor? Wham!

This will be a ‘drive-by’ etched forever in the annals of Democrat Party history. How many times did they have opportunities to run for cover, but intentionally refused! All criminals are provided the right to remain silent, right?

You see, if they presume perfection and are a bastion of intelligence, they could never imagine making mistakes or doing something wrong. Apologies be damned, full speed ahead in every instance of spewing their web of lies.

Today changes their modus operandi, forever. Their wounds are now too deep to lick or cover up, so what will they do?

Does this spell the end of the Democrat Party? How can they ever move forward as they lie on their death beds? Who will follow them as their Party tumbles off the cliff?

Story after story reported by the Democrat media sycophants led to massive amounts of drama and hysteria. The monetary costs alone will be no doubt into the Billions of dollars to taxpayers.

Worse yet, these Democrat efforts have led to many physical and brutal attacks upon humanity – even death in some instances. There are massive amounts of collateral damage.

Maybe even the worst damage Democrats have created is the hatred spewed in public to divide America based upon race, skin color, sex, and political correctness. They have no shame!

Even now after being hit with the truth laid out in Bruce Ohr’s 302’s (FBI interview notes), they will not only fail to apologize to America but will attempt even more drive-by drama aimed at Americans. Arrogance and power lusts have consumed Democrats and devoured their souls.

Today’s Democrats have no moral compass or conscious about the distinction between good and evil. Instead, it’s only about what ‘they’ want.

The rule of law is meaningless to these self-serving arrogant power grabbers. Imagine anyone having the audacity to protest and attempt harm to innocent people over law enforcement officers doing their jobs!

Instead, they prefer to instantly edict their own laws and select the laws they ‘prefer’ to obey and those they want to ignore. In the Democrat Party, Lady Justice is never blind but instead very selective.

Attempting to restrain Democrats from disobedience to the US Constitution, laws, and legal regulations is akin to trying to stop a speeding car by standing in front of it. However, they can instantly make up laws to charge others with non-crimes.

Even when they manufacture their own laws, we must never assume they would obey them. Instead, it is always, “Do as we tell you but not as we do!”

In addition, they think they are omnipresent, omnipotent, and omniscient. As an example, when President Trump says he wants to fly to New York, Democrats will tell us this is code words for his followers to separate children from parents on the border.

It’s so amazing to watch Democrat ‘wizards’ explain what President Trump really means when he speaks to the public. However, after being wounded by the 302’s, there is no doubt what Democrats mean when they speak about anything – it’s always, ‘get rid of President Trump and his followers.’

Consequently, when any Democrat speaks or promotes anything, Americans must now know there is no doubt they are going to lie and deceive until they are totally shunned, made irrelevant, and segregated from society.

The 302’s clearly confirm Democrats have nothing good to contribute to America.

Psalms 14:1-4 The fool (legalists and elites) hath said in his heart, There is no God. They are corrupt, they have done abominable works, there is none that doeth good.

The LORD looked down from heaven upon the children of men, to see if there were any that did understand, and seek God. They are all gone aside (failed), they are all together become filthy (liars, murderers, deceivers, those creating strife): there is none that doeth good, no, not one.

Have all the workers of iniquity no knowledge (ignorant of morality, justice, and sanity)? who eat up my people (distract and even destroy innocent people – especially children) as they eat bread, and call not upon the LORD.

Support Conservative Daily News with a small donation via Paypal or credit card that will go towards supporting the news and commentary you've come to appreciate.
Tags
Bruce Ohr Democrats Spygate