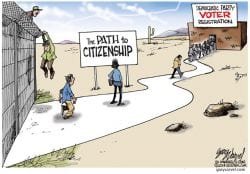 Let’s get right to the bottom of this debate by seeking professional insight from the Dictionary on the meaning of immorality: 1) immoral quality, character, or conduct; wickedness; evilness. 2) sexual misconduct. 3) an immoral act.

Next, we must compare this to the meaning of morality: 1) conformity to the rules of right conduct; moral or virtuous conduct. 2) moral quality or character. 3) virtue in sexual matters; chastity. 4) a doctrine or system of morals. 5) moral instruction; a moral lesson, precept, discourse, or utterance.

So obviously, it would become clear most would want to avoid immorality in favor of morality, right? As a novice in political affairs, perhaps I am missing something. However, we must ask why anyone would want to conflate these issues in any facet of life or professional career?

Looking at the differences between these two words, it become easy to contrast good from evil. Now, you’ll understand my confusion when Nancy Pelosi stated: “A Border Wall is immoral.” How could any inanimate object take on any human characteristic? Regardless, most would agree we don’t want anything to do with immorality, right?

At the least, it’s a “pause” moment to ask for a “re-play.” After several reviews, it is easy to conclude she did say this. Going from total disbelief to belief, I had to come around to the fact she must have meant it, or she wouldn’t have said it.

In California, we routinely see murals painted on walls. Some of them are artistic and some are nothing but graffiti. There are so many we have grown accustomed to seeing moral and immoral murals. However, I don’t know of anyone believing the wall or mural is what is immoral or moral, do you?

I did try to locate any wall story exposing the fact that a wall created an immoral act. Next, I searched for any story about walls attacking or intentionally harming people in any way. Gulp! I found zero, none, nada.

Rather than dive into hypothetical discourse about an immoral fence, it would be best to research what Democrats believe is “MORAL”. Unfortunately, the list is lengthy and writing about all moral positions for Democrats would be impossible.

Therefore, we must settle for only a few to explain how qualified they are in distinguishing morality from immorality. For many who obtain government educations, we want to keep it simple and about something anyone may research.

Let’s then begin with their moral position on the Civil War. Democrats were united in “moral” support for Black slavery. In addition, being pro-slavery meant support for a “moral” war that followed. Along with this issue came their organizing and support of the “moral” organization known as the KKK.

Democrats spare no punches when it comes to their leadership’s strong stand for morality. Let’s recall the promises President Obama made to all Americans? President Clinton was no different. Then there was President Johnson adding to examples of Democrat moral standing.

No, not just Democrat Presidents provide “moral” examples of how righteous people must act, but Congress is filled with many more examples. One of their often mentioned and esteemed Congressmen is Ted Kennedy. Let’s not overlook Nancy Pelosi since she is attempting to assure America she is the last bastion of morality.

Should we get into all the moral examples of Democrat Presidential hopefuls? It would be a universal moral example to conclude they all support and believe in Socialism. The biggest shocker of their example of morality is their stand on children.

Because they fail to take a stand in favor of American citizens over the Mexican drug lords, they fight the building of the Southern Border Wall in order to allow children to be used in sex trafficking schemes. Yes, if it is about illegal aliens, rest assured Democrats will show us the moral way with the decisions they make.

The real scary part of their ultimate displays of morality is the “Green New Deal” destined to starve millions to death by eliminating farmers and ranchers but also allow America to be overthrown by an banana republic country with a handgun after eliminating our military and internal police.

From these few examples of how Democrats view immorality to morality, please understand it is apparent they must be mentally ill – not able to focus upon reality. Knowing “up from down” is a prerequisite for sanity.

Insanity is also anyone attempting to prove that a wall is immoral. In turn, please demand that Democrats explain such hyperbole but they can’t. Therefore, they are out of their minds and steeped in politics that have no relevance to society.

Please pray for Donald Trump and ask God to keep America strong and not fall for the “morality” of Democrats. Their ploys are immoral, they are liars, and not even worth the time for consideration.

Support Conservative Daily News with a small donation via Paypal or credit card that will go towards supporting the news and commentary you've come to appreciate.
Tags
Congress Democrats liberals Nancy Pelosi Politics