Live Action also said that Pinterest users have reported for months that they experience difficulty in pinning Live Action’s content. Live Action conducted experiments testing whether other pro-life pins or Planned Parenthood pins were being shown the same censorship and found that was not the case.

Live Action received an email early Tuesday morning announcing that they were banned from Pinterest.

“Your account was permanently suspended because it went against our policies on misinformation,” the email read. “We don’t allow harmful information on Pinterest. That includes medical misinformation and conspiracies that turn individuals and facilities into targets for harassment and violence. 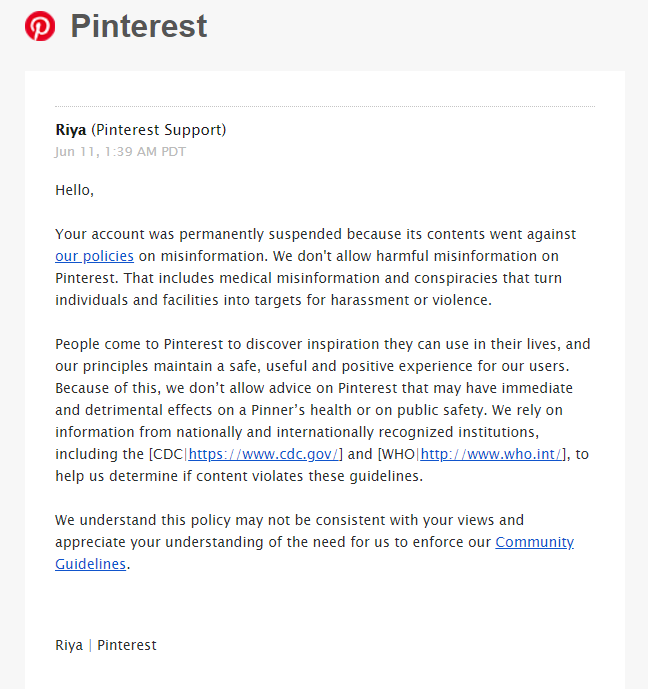 “We have more questions than answers about Pinterest’s censorship of Live Action and the pro-life message,” said Live Action founder and president Lila Rose in a statement provided to The Daily Caller News Foundation. “Based on the evidence provided, it appears that Pinterest intentionally added ‘LiveAction.org’ to a ‘pornography’ blocklist in an effort to suppress our pro-life content from being shared on the platform.”

“By secretly applying the label of ‘pornography’ to Live Action’s pro-life content, Pinterest demonstrates a concerted effort to sideline a leading pro-life organization the only way they knew how,” Rose added.

Pinterest Logic: You can freely pin if you’re Planned Parenthood, an abortion provider.

But if you’re a pro-life group & pin about the beauty & humanity of a baby in the womb, you’re banned bc you’re a threat to “Pinner’s health or safety.”@Pinterest @LiveAction#LifeCensored

The Live Action founder said Pinterest’s censorship is no mistake, and pointed out that the content Live Action shares on Pinterest is largely inspirational messages to pregnant women, ultrasounds, and medically accurate information on abortion procedures.

While saying they don’t censor content “with regards to political viewpoint,” @Twitter has banned @LiveAction & me from all pro-life ads.

Twitter CEO Jack Dorsey joined other business owners Monday in signing a New York Times ad protesting restrictive abortion legislation and saying abortion bans are bad for business. Rose says that this conduct from Dorsey is no surprise in light of Twitter’s censorship of Live Action.