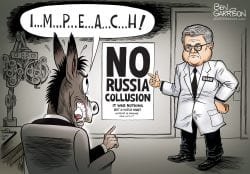 Today, the diseased Democrats are buzzing like a bunch of Africanized Bees doing their best to get the media to swarm and sting on their behalf. Normally, it works well for them. However, with the ending of the Global Warming, Russia, Russia, Russia and obstruction of justice hoaxes, most Americans are now tiring and won’t listen any longer.

After tons of BS being slung at citizens by the Democrats and their media accomplices, the odors are unmistakable and nauseating. Now, when Democrats or media speaks, who will ever again believe them? Everywhere Americans turn, the stench of the Democrats and media forces us to close our ears for fear of puking.

Instead of being America first, making competent decisions, writing laws that are just and fair, then leading America forward; Democrats have chosen to become insane, unsure, and act as if they are members of the Hate American Party. If you doubt this, try to find just one speech, one law, or one act instigated by any Democrat that is actually pro-America.

Try and be honest with yourself and take a piece of paper with a line drawn down the middle of the page. On one side, list all of the issues Democrats favor. On the other, list what Democrats oppose. In the opposition and/or hate column, one is forced to place at least these major issues:

Next, when we look at what Democrats now stand against, it’s easy to proclaim they are both out to lunch and out of business. Their positions are far removed from Mainstream Americans. They no longer deserve to be taken seriously, personally or as a political party. Insanity has become their norm. Consider only a few of the statements spewed daily by their leaders, like these today: “America is responsible for Venezuela’s Socialist Chaos, comparing Executive Privilege to virginity, ‘F**k You’ to Crisis Pregnancy Centers, Trump ‘Fooled All These Flyover Americans’.”

Yes, there are never shortages of sightings of Democrat insanity. For most Americans, it’s normal to feel sorry for malfunctioning people. We want and love success, challenges, and winners. However, Democrats are now racing at full speed to the bottom!