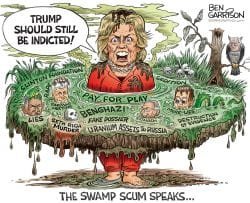 Have we lost our God-given abilities to understand what we see, hear, and identify for what it “really” is? If we were in medical class studying genitalia and the professor points to a photo of a penis and explains it is a vagina, shouldn’t we immediately arrange for psychological help? What else could this person ever say to convince us they should be believable? Yet, this is the new modus operandi for Democrats.

If their dogma is not factual then objectors are racists or something and just shut up. The Democrats are now in a fight to see who comes up with the craziest self-serving ideas; voters and facts be damned! The more idiotic, the better. There is no shunning of such people or beliefs from within their Party.

Even though the vast majority of Democrat leaders are Attorneys; rules, regulations, and laws have little or no bearing upon their efforts and actions. Such disregard for American law is on full display with the recent Russia Collusion-Dilution scene now being exposed before our eyes.

Not only did they break laws then, but now they are seeking to dismiss the law of “Double Jeopardy.” Instead of guessing about the next steps to be taken by a verdict they don’t like, why not consult any law dictionary so all non-attorneys might understand: “As described by the U.S. Supreme Court in its unanimous decision concerning Ball v. United States 163 U.S. 662 (1896), double jeopardy is a procedural defense that prevents an accused person from being tried again on the same (or similar) charges and on the same facts, following a valid acquittal or conviction.”

Does this give pause for changes to the 25th Amendment but this time for Congressional members? Could it be Democrats have been spreading dementia or perhaps simply laid their brains somewhere and can’t find them? Probably not, it’s now and always has been about power and money for them.

Everywhere we look or go, we now see their meanness, hysteria, and stupidity on parade. Americans are being led astray by toxic Democrat organizations, personalities, and their media accomplices. Democrats pompously pose as societal saviors while fixated upon tearing down America – at any cost.

Many falsely believe their “well-intentioned” groups would be welcoming of members into their congregations with a promise to offer goodness, guidance, rehabilitation, relief, comfort, and understanding, but are they? We could also falsely think these groups would be a one-stop shop to fixate on improving the lives of their members by placing them on a successful path of recovery from their insane ways and returning them into society as a sane person, but do they?

Instead, these groups are finally being exposed as shams fixated on wealth and power – at any costs. Their worshippers are being asked to jump off the cliff along with them. What’s even more alarming is many of their anti-American organizations are being funded by American taxpayers. Instead of being a productive American asset, they are akin to an organization promoting a cure for alcoholism by training members to become alcohol tasters.

As quickly as their members reach the groups objectives of a drunken stupor, the leaders arm them with megaphones, signs, and send them into public places disrupting people’s lives yelling and intimidating innocent sober observers. They spew their hate venom and warn us if we don’t bow down and obey their dogma, we will never be as ‘moral.’

Unfortunately, these people are so inebriated, sanity is not possible. They must be defeated. If we have the audacity to question them, we are immediately told to shut up because we are racists, sexist, homophobes, or whatever, right? Fortunately, we still live in America and we do have Constitutional protections to live and worship freely. Consider their attack on Tucker Carlson for disobedience when the unhinged Democrats busted down the door to his home threatening his family!

When anyone slams their religions down other’s throats, freedom has ended and tyranny has begun. The Democrat’s “Russia-Collusion-Delusion” is now exposing how close America came to falling. If we remain unconcerned, shame on us!

The religion of Socialism has infiltrated the Democrat Party but they refuse to admit it has failed wherever tried. Democracy and Socialism cannot co-exist! Socialism is nothing more than a fake religion for elites to gain wealth and power while the rest of us live in squalor, poverty, and hopelessness.

For the first time in American history, we have witnessed a political party morph into a religion and a death spiral. The Democrat party offers “NO” positive reason to vote for them. Instead, it’s “you must vote, believe, and accept our party or the world ends in 12 years!” Wake up America!