Owens, the communications director for conservative activist group Turning Points USA, on Saturday sent out a pair of tweets quoting Jeong’s anti-white statements — which did not earn her a Twitter suspension — but swapped out the word “white” with “Jewish” and “black.” 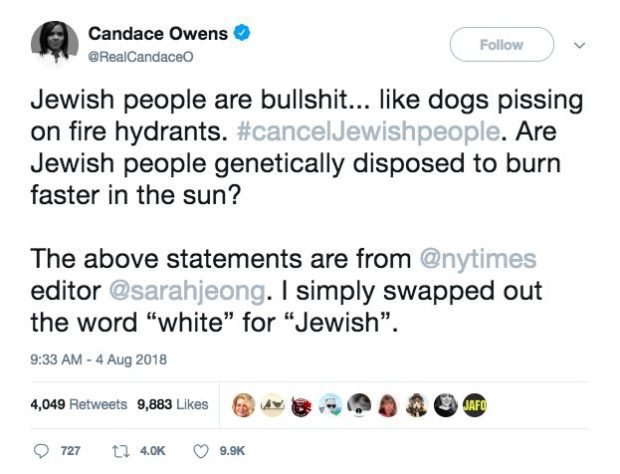 “Twitter takes reports of violations of the Twitter Rules very seriously,” Twitter’s support team wrote in an email to Owens, who shared it with TheDCNF. “After reviewing your account, it looks like we made an error.”

“This was our mistake and we’ve apologized to the account owner for the error,” a spokeswoman for Twitter told TheDCNF. The spokesperson did not say whether a human content monitor or an algorithm was responsible for suspending Owens’ account.

Owens’ objective in sending out the provocative tweets was to demonstrate what she sees as a racial double standard, she told The Daily Caller News Foundation in a phone interview. And she thinks Twitter proved that point beautifully.

“The thing is, I wouldn’t have minded if I was locked out, because I actually agree with Twitter that that language is inappropriate,” Owens said.

“My point in tweeting that and replacing the word with black and Jewish yesterday was to show how different that mentality is when you see it in that context and you see talking about Jewish people and predisposed to burning under the sun or black people saying they should live underground,” she said.

“It’s horrifically racist, but somehow we’ve gotten to a point in society where it’s OK to say the exact same thing about white people, and that’s problematic.”

Twitter’s regulation of speech is under increased scrutiny after the company was revealed to have suppressed prominent conservatives on the platform, including Republican Reps. Matt Gaetz of Florida, Jim Jordan of Ohio, Mark Meadows of North Carolina and Devin Nunes of California. Then, too, Twitter said its censorship was in error.

Twitter similarly suspended conservative commentator Kathleen McKinley on July 27 for two tweets: one that opposed clearing self-identified transgender persons for military duty and one that tied “extreme Muslim beliefs” — rather than mainstream Muslim beliefs — to the practice of honor killings.

Unlike Owens, McKinley has yet to receive an apology from Twitter.

Support Conservative Daily News with a small donation via Paypal or credit card that will go towards supporting the news and commentary you've come to appreciate.
Tags
Candace Owens social media bias Twitter

To Avoid Sanctions, Countries Are Ditching The US Dollar