An NFL player appeared Sunday to have more respect for the corrupt government of Mexico than his home country.

Oakland Raiders running back Marshawn Lynch was reported to have sat on the bench during the playing of the U.S. National Anthem but then rising to stand for the anthem of Mexico as it was played prior to a game hosted by the United State’s southern neighbor.

Marshawn Lynch sits during the US national anthem, stands for Mexican anyhem pic.twitter.com/8wdaKprEki

Lynch, who hasn’t had a 100+ yard game since October of 2015, hasn’t stood for the “Star-Spangled Banner” since returning from a 14-month-long retirement earlier this year.

President Donald Trump voiced his displeasure with Lynch’s obvious disrespect for America and suggested that he be suspended.

Marshawn Lynch of the NFL’s Oakland Raiders stands for the Mexican Anthem and sits down to boos for our National Anthem. Great disrespect! Next time NFL should suspend him for remainder of season. Attendance and ratings way down.

The running back has made no secret of his dislike of Trump. 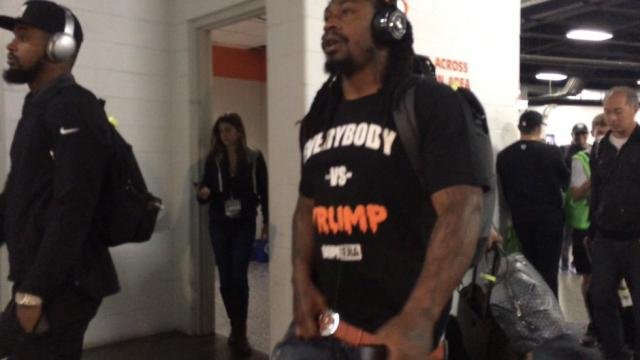 Oakland Raiders owner Mark Davis has refused to demand that his players respect the nation, its flag and those who serve in the military by standing during the playing of the National Anthem.

Lynch was ranked 22, 23 and 25 in week 11 running back rankings and managed just 67 yards in Sunday’s lopsided loss to the New England Patriots.

Support Conservative Daily News with a small donation via Paypal or credit card that will go towards supporting the news and commentary you've come to appreciate.
Tags
Marshawn Lynch National Anthem Protests The NFL