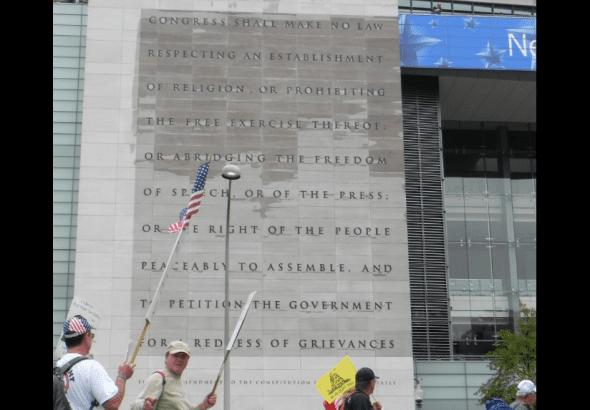 The First Amendment to the U.S. Constitution has become so institutionally, socially and legally misunderstood that it has become a cudgel against the freedoms that its authors intended to protect.

The first amendment was cited by the courts as they pulled the ten commandments from government buildings, banned prayer at high school games, and sought to force a baker to cater an event with which he disagreed. Then, the government ignored that basic right when it suited them.

Former Supreme Court Justice Antonin Scalia wrote that the Establishment Clause of The First Amendment had been turned into a social engineering “bulldozer” in his dissenting opinion in Lee v. Weisman. The court ruled that schools may not sponsor prayers, invocations or benedictions as part of their events. The court later ruled in Santa Fe Independent School District v. Doe that students were also not allowed to lead prayers before or during events.

The Establishment Clause states that “Congress shall make no law respecting an establishment of religion, or prohibiting the free exercise thereof…” In no way does the clause prevent the free exercise of religion at school events. The amendment’s intent was to ensure that the government was unable to establish a state-run church as Henry VIII had done in England by placing himself at the head of the Church of England during the Reformation and having monks that spoke against him executed – something no one wants to repeat.  The way the court interprets the First no longer protects one’s right to free practice but instead pushes atheism on the masses. Judges are using the power of the gavel to change the freedom of religion into freedom from religion.

A real noodle twisting thought is what happens if atheism gets treated as a religion. The government would be prevented from forcing atheism on citizens through law, rule, or regulation and the courts would have no choice but to allow the practice of all religions otherwise it would be seen as establishing the national religion of Atheism. A definition in the Merriam-Webster dictionary says that religion is “a pursuit or interest to which someone ascribes supreme importance.” Hmmmm, but I digress…

Attorney General Jeff Sessions weighed in on another misapplication of the First Amendment during remarks on Wednesday to the Heritage Foundation’s Legal Strategy Forum.

The Department’s Office of the Solicitor General filed an amicus brief in support of a Colorado baker [Jack Philips] who was sued for refusing to bake a cake for a same-sex wedding. But, as you all know well, the First Amendment protects the right to the free exercise of religion for all Americans.  Although public-accommodations laws serve important purposes, they—like other laws—cannot be interpreted to undermine the individual freedoms that the First Amendment guarantees.  That includes the freedom not to create expression for ceremonies that violate one’s religious beliefs.

“Forcing Phillips to create expression for and participate in a ceremony that violates his sincerely held religious beliefs invades his First Amendment rights,” Acting Solicitor General Jeffrey B. Wall wrote in the brief.

This lack of self-education, a failing of our educational system, or both leads to ridiculous statements such as those by the NFL Players Association after several players chose to kneel during the playing of the National Anthem at NFL games.

“Wearing an @NFL uniform will not come at the expense of our first amendment right to peacefully protest as citizens.,” the union tweeted.

Even if the NFL or team owners had punished players for kneeling during the anthem, the First Amendment would not have protected their National Anthem protests.

Only if the government made a law, rule, ordinance or regulation making the protests illegal would the First Amendment come into play. If a company or its owner creates a policy that says employees and contractors may not protest at their place of work, there is no Constitutional protection to prevent supervisors from cutting their hours, terminating a contract, demoting or firing them. NONE! In fact, Jemele Hill of ESPN was suspended from her job after posting politically-motivated content on Twitter which violated the sports network’s social media policy.

It is important to have a firm grasp of the rights protected by the Constitution lest they be infringed by progressives as they continually reshape those rights to suit their agenda.

Full Text of the First Amendment to the Constitution

“Congress shall make no law respecting an establishment of religion, or prohibiting the free exercise thereof; or abridging the freedom of speech, or of the press; or the right of the people peaceably to assemble, and to petition the Government for a redress of grievances.”

Support Conservative Daily News with a small donation via Paypal or credit card that will go towards supporting the news and commentary you've come to appreciate.
Tags
The First Amendment