Loudmouth liberal actor Robert De Niro may have played a tough guy in many of his movies but his trash talking of President Trump is just the roaring of a paper tiger.

The award-winning faux gangster made a big deal out of making a pilgrimage to the United Nations right before Trump delivered his address that drove his America-last enemies to fits as the POTUS decried socialism and threatened to wipe “Rocket Man” Kim Jong-un off the face of the planet.

But De Niro had a different mission. He was there with hat in hand asking for financial help to rebuild the Caribbean island paradise of Barbuda which was wiped out by Hurricane Irma.

While some liberals will be quick to applaud Mr. De Niro’s humanitarianism, upon further examination his intentions to be less altruistic and more tainted by cynicism and greed.

It just so happens that the actor/activist owns property in Barbuda and the quicker that the rebuilding can take place, the sooner that construction on his swanky resort can commence.

Via Travel and Leisure “Why Robert De Niro Is Fighting to Rebuild Barbuda After Hurricane Irma”:

Robert De Niro appeared at the United Nations on Monday, September 18. He implored the organization to help rebuild the island of Barbuda and to ensure that “paradise is not lost.”

Immediately after Hurricane Irma devastated the island, De Niro announced his efforts to help rebuild Barbuda, where 90 percent of buildings were damaged. It’s also where he plans to open a resort, the Paradise Found Nobu.

“We are beyond saddened to learn of the devastation in Barbuda caused [by] Hurricane Irma and look forward to working with the Paradise Found Nobu team, the Barbuda Council, GOAB, and the entire Barbuda community to successfully rebuild what nature has taken away from us,” De Niro said in a statement to the New York Daily News after the hurricane.

In his speech to the UN, De Niro said that the countries of the world “must act together to help the most vulnerable.” He continued his plea, saying that “the recovery process will be a long, hard road. Barbudans must be a part of it, their homes repaired stronger, rebuilt stronger, new homes stronger. The immediate needs — power, water, food, medical care, animals sheltered — must be met.”

The island, as it is right now, is uninhabitable, according to government officials. Estimates place the cost of rebuilding Barbuda at $300 million: more than 20 percent of the country’s GDP.

De Niro and his business partner, James Packer, bought the K Club Resort on Barbuda last year and renamed it Paradise Found Nobu. The purchase was a contentious debate on the island. More than 300 of the island’s 1,500 residents signed a petition against the development, saying that it was excessive and illegal.

Construction on the resort is on hold in the aftermath of Hurricane Irma. De Niro did not say how the resort was affected by the storm.

De Niro may be an obnoxious and wretched elitist celebrity prick but he is a textbook example of liberal hypocrisy.

Support Conservative Daily News with a small donation via Paypal or credit card that will go towards supporting the news and commentary you've come to appreciate.
Tags
Hollywood Irma Robert De Niro The United Nations 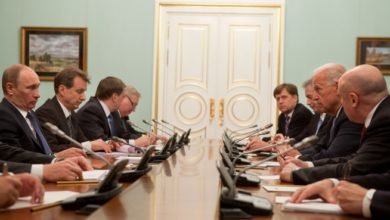