Well, here we go again, Liberals fall back on the only argument that they seem to have in their arsenal. In this country when a black person doesn’t get what they want or things don’t go their way – it must be racism.

The Miami Dolphins took some heat over the weekend after they announced they were signing 34-year-old Jay Cutler to a one year contract instead of controversial QB Colin Kaepernick. We all remember Kaepernick who began kneeling during the national anthem to protest police brutality. But as soon as the Dolphin pick was announced, the accusations started on Twitter. One user posted on Twitter,   “I‘m not sure what it says about Jay Cutler that the Dolphins signing him is what it took for most fans to realize how racist the NFL is.”

I'm not sure what it says about Jay Cutler that the Dolphins signing him is what it took for most fans to realize how racist the NFL is.

This guy obviously has not looked at the makeup of the NFL lately. At the start of the 2014 season, 68% of the league was African-American. I don’t understand why people have to look for a problem where there is none. Liberals see a racist behind every tree and everything negative that happens to a minority is due to their race.

Minority communities are increasingly aware of the Left’s agenda. For generations, they have voted for Democrats and for generations it has gotten them nothing.

Look, if Kaepernick was a great player and he could win games, I’m sure he would be working on some NFL team. For me, I think he is an unpatriotic piece of crap and a loser. But, I guess that makes me a racist, so who cares? There are worse things to be called. 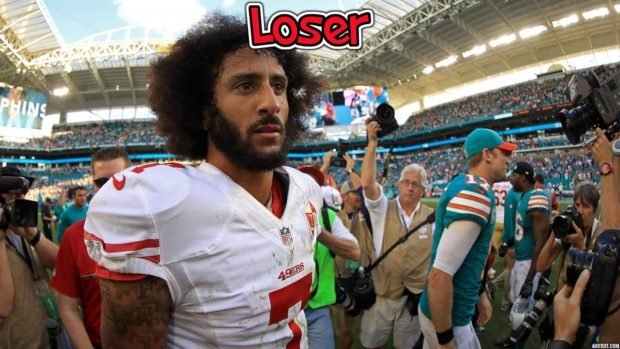 Support Conservative Daily News with a small donation via Paypal or credit card that will go towards supporting the news and commentary you've come to appreciate.
Tags
Colin Kaepernick Democrats Miami Dolphins Twitter