There is something ironic when you have a politician like Democrat Congresswoman Maxine Waters shouting to impeach President Donald Trump because he is mentally unstable when she is the one who needs to be measured for a straight jacket.

There is no doubt that this demented old black woman needs counseling in the worst way. Calling for Trump’s impeachment when he is only 6 months into his first term and has done nothing that even smells criminal shows how demented that this woman is.

So far all the investigations involving Trump have turned up nothing on the POTUS and his associates but are turning up much on the corruption of the Obama administration instead.

“I don’t honor him, I don’t respect him and I am not going to tolerate him,” she said about Trump. “I am going to do everything I can do to get him impeached.” Come on Maxine; tell us how you really feel.

But her derangement doesn’t stop with Donald Trump, she said about Ben Carson; “If he thinks when he comes before my committee where I am the ranking member (of the Financial Services Committee) that I am going to give him a pass … I am going to take his ass apart.”

And about Attorney General Jeff Sessions Waters said, “a racist, he’s a throwback. We know his record; we know the statement’s that he’s made. He really did like the KKK until he learned that they smoke pot.”

Like all the other old black politicians they seem to be stuck in the 1960’s, they still think they are in the middle of the Civil Rights Movement.

But we also have two demented old white women, Nancy Pelosi and Elizabeth Warren who also need to be fitted for a rubber room.

The three of them need to retire to the Liberal-Progressive old folk’s home, where they can sit and reminisce about the glory days when they almost tore this country apart.

They can’t retire soon enough for me. 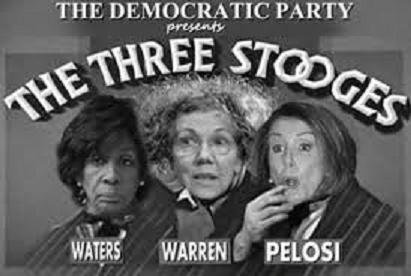 Support Conservative Daily News with a small donation via Paypal or credit card that will go towards supporting the news and commentary you've come to appreciate.
Tags
Elizabeth Warren Maxine Waters Nancy Pelosi