I have always said and I believe 100% that it was Conservatives fault that we have Obama for 8 years. Staying home because McCain wasn’t Conservative enough, likewise with Romney gave us the mess we are in today.

I belong to about a dozen groups and receive almost the same in news-letters. Lately I have been browsing over the content and going directly to the comment section, and what I see scares me. Comment after comment repeating the same things again, it’s like Yogi Berra said, “It’s like Déjà vu all over again.”

Doesn’t matter who it is, Trump, Rubio, Cruz, Bush, (It doesn’t matter about him anymore) It’s all the same; there are those that say they are staying home if one of them wins the nomination. If they stick by what they say, that lying piece of crap Hillary will be president, unless she gets indicted, (and she should) in that case Commie Sanders will be running the country, and if that happens we won’t have a country much longer.

I consider myself a far right leaning guy; I am hard right on most things. But you can rest assured that I will be voting for who ever wins the Republican nomination. Because there is not a Democrat out there that would be good for this country. The Democratic Party should change their name to what they truly have become “The Liberal-Progressive-Socialist Party.” They are a far cry from the Party of J.F.K.

I am writing this in hopes it will wake-up any narrow minded Conservatives out there that think a candidate must agree with 100% of what they believe in order to get their vote. If you can’t vote for someone, than get out and vote against someone.

I was told something long ago, “If you don’t vote, you have no right to complain.” And if you don’t vote and one of those Socialists’ wins, I better not find out where you live. 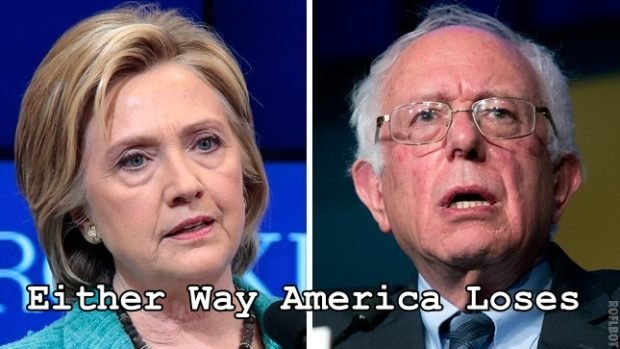 Support Conservative Daily News with a small donation via Paypal or credit card that will go towards supporting the news and commentary you've come to appreciate.
Tags
Bernie Sanders Hillary Clinton Politics