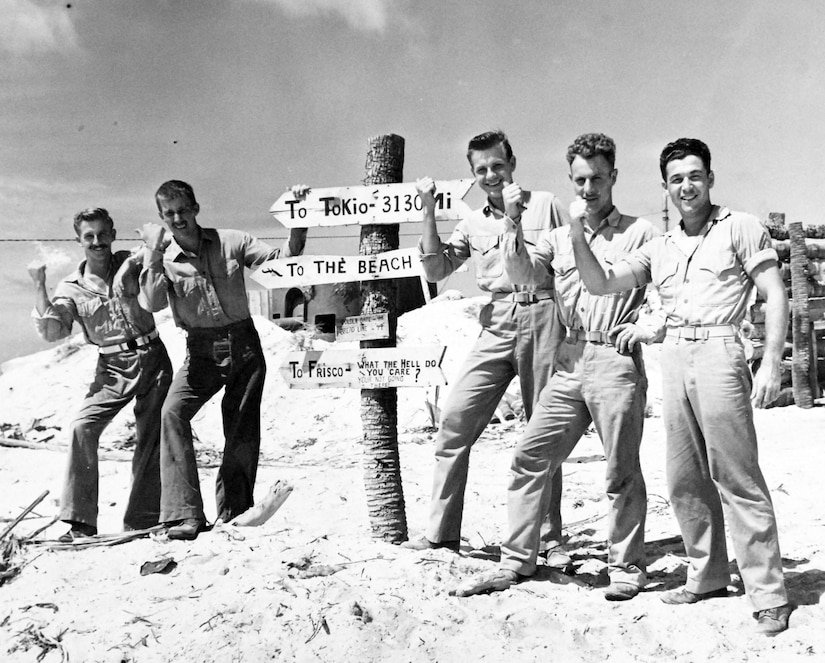 Marine Corps 1st Lt. William Deane Hawkins gave everything he had to help the Allies wrestle control of the strategic atoll of Tarawa from the Japanese during the latter half of World War II. While he never returned home from that small island, his efforts earned him a posthumous Medal of Honor.

Hawkins was born on April 19, 1914, in Fort Scott, Kansas, to parents William and Clara Jane Hawkins. When he was 3, Hawkins suffered severe injuries after accidentally being scalded by a pot of boiling water. According to a 1986 El Paso Herald-Post article, burns covered a third of his body, and it left him with “one leg drawn up and an arm so crooked that doctors wanted to cut the muscle to straighten it.” The young boy persevered, though, relearning how to walk and recovering better than expected.

Within a few years of the incident, Hawkins’ parents relocated to El Paso, Texas. His father died when he was 8, according to a 1980 El Paso Times article, so his mom, who was a nurse, went back to school to become a teacher to better support him.

Hawkins was an excellent student. His keen intellect allowed him to skip fifth grade and, according to the El Paso Historical Society, he once won the state chemistry essay contest.

After graduating from El Paso High School at 16, Hawkins went to the Texas College of Mines — now the University of Texas at El Paso — on a scholarship to study engineering. During that time, he worked a lot of odd jobs to make money, including laying pipeline in New Mexico when he was 17, the historical society said.

When the U.S. was plunged into World War II, Hawkins felt compelled to serve. He was denied entry into the Army and Navy, so on Jan. 5, 1942, he joined the Marine Corps. He attended scout sniper school in July 1942 and was sent to the Pacific not long after with the 2nd Marines, 2nd Marine Division.

Hawkins’ superiors noticed he was a natural leader, so he was promoted a few times rather quickly. He accepted a battlefield commission in the Solomons Islands on Nov. 18, 1942, during the Guadalcanal campaign. By June of the following year, he’d been promoted again to first lieutenant.

By the fall of 1943, he had been named the commanding officer of a scout sniper platoon attached to the assault regiment that was preparing to attack Japanese-held Tarawa Atoll. The small island of Betio on the southwest side of the atoll had a strategic airfield, of which the Allies wanted to gain control.

On Nov. 20, Hawkins’ platoon was tasked with landing on Betio ahead of the primary wave of troops to make way for them. The island, which was only 2 miles long and about 800 yards wide, was well-defended by the Japanese, so they faced intense fighting immediately — a first for any of the Pacific campaigns.

Hawkins was the first to get off the transport. Without hesitation, he moved forward through heavy enemy fire, quickly working to neutralize enemy emplacements. Throughout the day and night, he led his men in joining other Marines trying to gain a foothold on the nearby beachhead and repeatedly risked his life to direct and lead attacks on pillboxes and other enemy strongholds.

At dawn on the 21st, the platoon continued its effort to clear the small beachhead of enemy resistance. Hawkins initiated an assault on a position fortified by five enemy machine guns. During a moment of withering fire, he crawled forward toward the emplacement, fired his gun point-blank into it and then destroyed it with grenades.

Hawkins was seriously wounded five times during the battle, including in the chest during that last assault. However, he refused treatment and kept fighting. Hawkins destroyed three more pillboxes before he was severely injured by Japanese shellfire.

According to the El Paso Herald-Post, he died that evening aboard a hospital ship. However, his daring tactics during a crucial phase of the battle gave inspiration to the men around him, which was instrumental in the 2nd Marines taking the island and winning the entire atoll.

“It’s not often that you can credit a first lieutenant with winning a battle, but Hawkins came as near to it as any may could,” said assault commander Col. David M. Shoup after the battle. “He was truly an inspiration.”

On Aug. 30, 1944, Hawkins’ mother received the Medal of Honor on her son’s behalf from President Franklin D. Roosevelt during a White House ceremony.

Hawkins was initially buried on Tarawa, but his remains were reinterred in 1949 at the National Memorial Cemetery of the Pacific in Honolulu.

In the brave first lieutenant’s honor, a naval destroyer originally called the USS Beatty was renamed the USS Hawkins and commissioned in February 1945. The air strip on Betio Island that his fellow Marines helped capture was also named Hawkins Field. As recently as 2020, Hawkins’ alma mater, the University of Texas at El Paso, created a scholarship for deserving undergrads in his name.

Hawkins’ Medal of Honor is housed at the El Paso County Historical Society in El Paso.

Support Conservative Daily News with a small donation via Paypal or credit card that will go towards supporting the news and commentary you've come to appreciate.
Katie LangeNovember 21, 2022
0
Facebook Twitter Reddit Telegram Share via Email Print