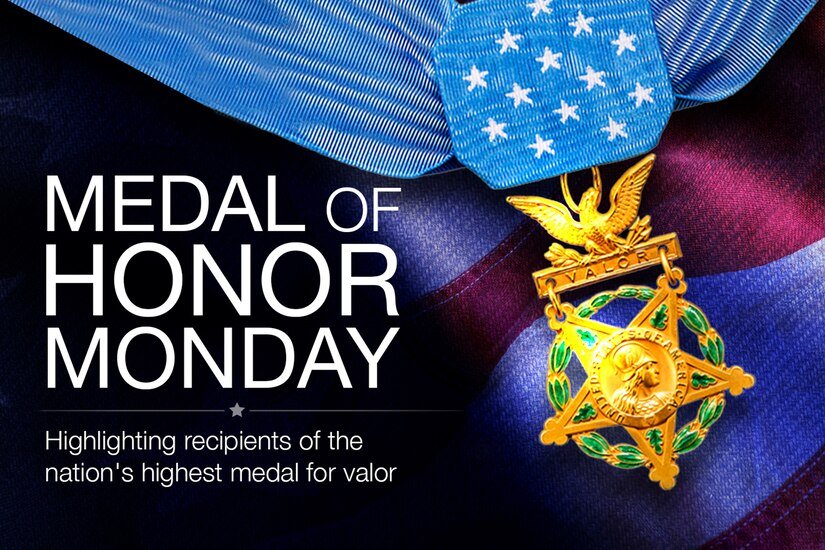 Navy Capt. David McCampbell wasn’t just the top naval ace of World War II — he’s considered the service’s all-time leader in aerial combat. His spirit and leadership are what made his air group one of the war’s most decorated, and they earned him the Medal of Honor.

McCampbell was born Jan. 16, 1910, in Bessemer, Alabama, to parents Andrew and Elizabeth McCampbell. When he was about 12, the family moved him and his older sister, Frances, to West Palm Beach, Florida.

As a teen, McCampbell moved north to attend the Staunton Military Academy in Virginia. His graduation in 1928 earned him an Army commission, according to the Army University Press. Instead, he chose to attend the Georgia Institute of Technology, where he played football and was on the swim team. He also joined Navy ROTC, which led to his appointment to the Naval Academy. While in Annapolis, McCampbell became an accomplished swimmer and diver, competing in and winning various NCAA regional championships.

McCampbell graduated in June of 1933, but since Great Depression-related economic issues had affected the number of commissions that were available, he immediately went into the Naval Reserve. He returned to Alabama to work in construction and at an aircraft assembly plant for a year before finally receiving orders in June 1934 to report for active duty.

The young ensign’s first duty station was aboard the USS Portland. By May 1937, he’d worked his way up in the ranks and began flight school in Pensacola, Florida, earning his wings in April 1938. His first few years as an aviator were spent serving on the USS Ranger and the USS Wasp.

World War II began while McCampbell was on the Wasp. The aircraft carrier spent the first half of 1942 in the European theater before being transferred to the Pacific. On Sept. 15, 1942, the ship was sunk during the Guadalcanal campaign. McCampbell, surviving its demise, was promoted to lieutenant commander and brought back to the U.S.

By late 1943, McCampbell was in command of a fighter squadron attached to the USS Essex. He was promoted to commander in January 1944 and put in charge of the ship’s Air Group 15 — one of the war’s most decorated air groups.  It was in this position that McCampbell became one of World War II’s great aces.

McCampbell took out his first Japanese aircraft on June 11, 1944. About a week later, during the First Battle of the Philippine Sea, he led several F6F Hellcat fighter aircraft against 80 Japanese carrier-based planes that were headed toward the U.S. fleet. McCampbell personally destroyed seven of those hostile aircraft — five bombers and two fighters — which helped his outnumbered men virtually annihilate the enemy. According to the Encyclopedia of Alabama, McCampbell’s team accounted for about 68 of the 600 Japanese downed aircraft.

On Oct. 24, 1944, during the infamous Battle of Leyte Gulf, McCampbell and a fellow pilot, Ensign Roy Rushing, took on 60 hostile Japanese aircraft that were approaching U.S. ships. Despite the overwhelming airpower against them, McCampbell shot down nine Japanese aircraft, setting a U.S. single mission aerial combat record. Rushing took out another six enemy warplanes. Their successes completely threw off the Japanese air group; the remaining aircraft abandoned their mission before any of them reached the U.S. fleet.

In a 1987 U.S. Naval Institute interview, McCampbell explained how he nearly didn’t make it back to his ship after that engagement.

“When I got over the ship, I found they had a flight deck full of planes, and I knew that to launch all those planes would take a good 20 minutes, and I didn’t have that much gas left,” he said.

When the ship did make room for him to land, he said, “I ran out of gas on the deck. They had to push me out of the landing gear area. I found out from the mechanic that re-ammunitioned the guns that I had exactly six rounds left in the starboard outboard gun, and they were all jammed.”

“But it worked out all right,” he added nonchalantly.

McCampbell returned to the U.S. in December 1944. By then, he had become the Navy’s all-time leading ace and top F6F Hellcat ace, having downed 34 Japanese aircraft during his months of aerial combat. His impressive tally made him the third-highest American scoring ace of World War II, behind only Army Maj. Richard Bong and Army Maj. Thomas B. McGuire, neither of whom survived the war.

For his bravery in the skies, McCampbell received the Medal of Honor on Jan. 10, 1945, from President Franklin D. Roosevelt during a ceremony at the White House.

After the war, McCampbell served in various positions, including as a senior naval aviation advisor to the Argentine Navy. After becoming a captain in July 1952, he also notably served as the captain of the aircraft carrier USS Bonhomme Richard and as a member of the Joint Staff in Washington, D.C. In the latter position, McCampbell helped draw up contingency invasion plans during the 1962 Cuban Missile Crisis, according to a 1996 Palm Beach Post article.

McCampbell was married a few times and had three children, Frances, David and John. He finally retired from the Navy in 1964 after 31 years of service.

According to the Palm Beach Post, McCampbell “dabbled in real estate in the Bahamas” before setting back down near West Palm Beach, where he lived for the rest of his life.

McCampbell died on June 30, 1996, at a veteran’s home he’d been living at for about a year. He was buried in Arlington National Cemetery.

His legendary exploits have not been forgotten. The destroyer USS McCampbell was named in his honor. There’s also the David McCampbell terminal at the Palm Beach International Airport, which was named for him when the airport opened in 1988.

McCampbell’s medal is on display at the International Swimming Hall of Fame in Fort Lauderdale, Florida.