I think the Disney Corporation hasn’t been paying close enough attention to the culture war. That war hasn’t been going very well for the left, yet Disney somehow thinks it can win where others have failed. It has decided to engage in the war over our children.

Last year, schools across the country informed parents that what was taught to children (or how they were groomed) was none of the parent’s business. They would continue to teach critical race theory (CRT) and normalize gender dysphoria – and the parents had better stay out of it, or else.

Loudon County Virginia became the poster child for nationwide radicalism in schools. They were letting boys, pretend to be girls, to facilitate sexual assaults, on school property. They even went so far as to have a father arrested, for attempting to bring to public light that his daughter had been raped in a school bathroom by one such transgender “girl.”

When the National School Boards Association suggested that protesting parents should be treated as criminals – and the FBI decided to give them some help with that – the exposure of the conflict went nationwide and triggered a counter-revolution. The left gravely underestimated the protectiveness of mama and papa bear. 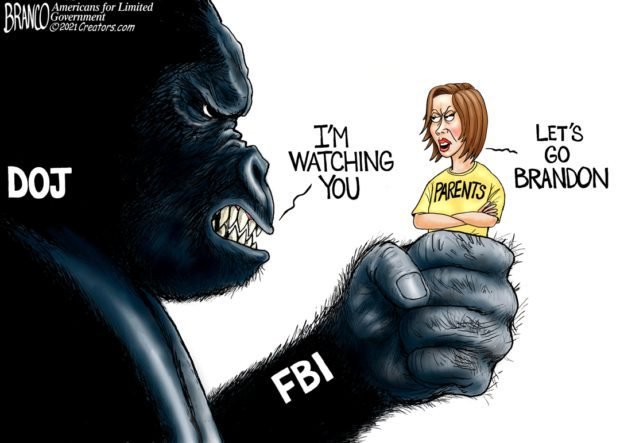 In support of parents, conservative politicians began to run on a parental rights platform. Glenn Youngkin’s gubernatorial win and conservative wins in countless school board and local elections across the country last year are credited to the movement that protesting parents created.

Numerous states passed various forms of anti-CRT legislation. They either banned its teaching outright or defunded schools that promoted it.

The Florida legislature has just passed the “Parental Rights in Education Bill.” It pushes back against the normalization of gender dysphoria in school, by making it illegal for teachers to discuss sexuality with children in kindergarten through the third grade. That legislation was far too radical for the radicals to ignore. It drew a nationwide response, with overwhelming condemnation from the left, and overwhelming support from parents.

Factoid: There are far more parents than leftist nuts in America – Surprise!

The culture war wasn’t going well for the left, so the Disney Corporation decided to see if it could turn the tide. Disney’s management decided to come out against Florida’s anti-sexual grooming law (sorry libs, that’s more accurate than “don’t say gay”). The corporation has announced its full opposition to the law – because it, like the schools, thinks it knows what is better for children than their parents.

But, if you’re going to engage in a war, you might as well go all in – and Disney did. They also announced a commitment to use more gay themes in their children’s programming – because you know … they’d rather subvert kids than make money.

So, the happiest place on earth, that makes mad stacks of cash from parents, to entertain their kids, has made a strategic (strategic but not smart) decision. It will take the side of leftist radical nuts, against the very parents that it makes those mad stacks from – smart.

As an admiral destined for defeat (Isoroku Yamamoto) once said, “I fear we have awakened a sleeping giant and filled him with a terrible resolve.” That pretty much describes what Disney has done. It kicked a sore spot in the American body politic and triggered some consequences it didn’t expect. I won’t call them unanticipated consequences, because they were only unanticipated to a company that was too stupid to see the obvious.

The state of Florida has decided to reconsider the preferential treatment it has given the Disney Corporation since the 1960s. It turns out that Disney has benefitted from a number of legal and financial benefits not given to any other company in Florida. Under Ron DeSantis’ leadership, the state is putting some brainpower into thinking about if that’s really best for the state.

Disney employees are also starting to push back. It turns out that Disney employs more parents than radicals – even though the parents tend to be more restrained that their screaming commie lunatic employee subset. They’re sending anonymous (for now) letters protesting Disney’s new LGBTQ-friendly direction. They’re also (and I didn’t see this coming) leaking stuff. We’re suddenly getting treated to recordings of management discussing plans to incorporate gay themes in children’s cartoons and movies. We’re also starting to hear snippets about the number of Disney employees who have been implicated in child molestation. It turns out that employees who know where all of the skeletons are hidden aren’t necessarily on board with the company’s new direction.

Here’s one consequence that Disney should have anticipated, but apparently didn’t. Parents are beginning to take their business elsewhere. Who could have seen that coming? Disney apparently thought that they could slap their customers in the face, and their customers couldn’t do anything about it. But Disney isn’t the airline industry. It turns out customer satisfaction factors into a parent’s decision to shell out a couple of hundred bucks for mouse-themed gear. What Disney apparently forgot was that it’s in the entertainment business – and spending doesn’t get any more discretionary than spending for entertainment. Their customers are customers by choice and nothing else.

A recent poll conducted by the Convention of State Action and Trafalgar found that 68 percent of voters are less likely to do business with Disney as a result of its pro-grooming strategy. 69% of those voters said they will support family-friendly alternatives to Disney for their entertainment.

Disney apparently thought it could get away with a shift in its core values because parents had nowhere else to go. But in a capitalist economy, “nowhere else to go” translates to “market opportunity” for someone else!

The Daily Wire was launched in 2015 by Jeremy Boreing and Ben Shapiro. It has become one of America’s fastest-growing conservative media companies, and it just announced that it’s moving into the family-friendly programming market – at Disney’s unintentional invitation.

The Daily Wire has committed to spending $100 million on family-friendly programming. It’s a small start. But with 7 out of 10 of Disney’s customers vowing to support Disney alternatives, it’s also a smart start. As Boreing has said about his business pursuits:

“If they want to keep sending money our way, we’ll take it.”

Every child learns not to touch a hot stove after getting burned once. But the people who think that socialism will work if we just give it one more try, aren’t that smart. The left tried to push CRT on our children – and got burned. Then the left tried to push transgenderism on our children – and got burned. Now Disney has decided to climb up on a stool and touch the stove to see what happens. We’ll see how that works for them. I only wish I could buy stock in The Daily Wire. But unfortunately, it’s wholly owned by its greedy, and smart, founders.

Support Conservative Daily News with a small donation via Paypal or credit card that will go towards supporting the news and commentary you've come to appreciate.
Tags
Disney