If elected president, Joe Biden will be older his first day in office than when Ronald Reagan left the White House. The presumptive Democratic presidential nominee has always been gaffe-prone, but his increasingly common verbal missteps and outbursts have led to harsh scrutiny. It’s one reason some believe he’s spending most of his time at home.

As Joe Biden’s mental cognitive abilities continue to decline more and more rapidly each day, his racist rhetoric is increasing. His handlers and those around him are well aware of what is happening and are trying desperately to control every public appearance he makes even cutting him off and cutting interviews short, but even that is not helping. He forgets where he is, he stumbles and stutters over words, gets confused as to where he is, says he’s running for senator, gets his wife confused with his sister and gets angry with people and supporters easily right in their face and insults them. When you see him in his basement bunker he definitely looks old and feeble. This is not someone you want in office with his fingers on the nuclear codes. In fact if by chance Biden would win, he would only be a figurehead with a shadow government planning and running everything.

Biden’s racist rhetoric has always been out there and the media always made excuses for it, but now it’s more out there than ever. He told Charlemagne on the Breakfast Club radio show that if you don’t vote for him you are not black. This caused a huge uproar in the black community. Charlemagne recently said to Biden via Twitter to “Hurry up and pick someone as your running mate so I know who to vote for because I sure as hell ain’t voting for you.”

During a recent virtual event from his basement, Former Vice President and 2020 Democratic presidential candidate Joe Biden appeared to forget what year it is while he was discussing the 2020 census, “But you know, in the 2020 census, which is now two censuses ago,” Biden had said.

This is not the first time this has happened with Biden, as a very similar incident happened just a day prior to this incident when Biden forgot which community center he was at. The campaign was held at Wilmington, Delaware last Tuesday where Biden welcomed people to the wrong community center.“Good afternoon everyone. Welcome to Kingswood Community Center,” the former Vice President had said.There was a look of confusion on his face when he added, “Actually that’s one down where I used to work…it’s a joke…I didn’t know where we were.” 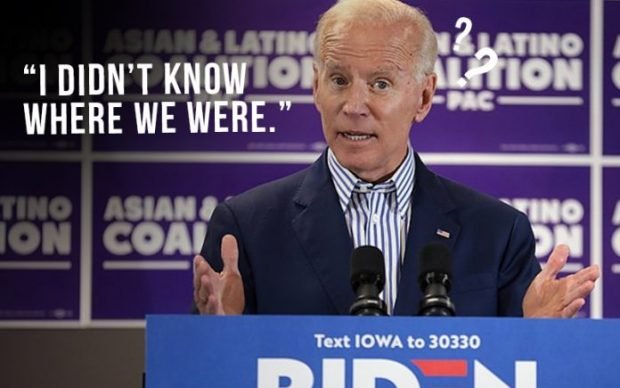 Biden tried to brush it off as a joke, but it was no joke.

What has been embarrassing for Mr. Biden in his campaign trail is that anyone can easily understand that he mainly depends on his handlers to get him through the course of the day.

When Biden was being interviewed by ABC he had to be cut off by his handlers when he started slipping up. President Trump later tweeted, “Joe Biden saved by a staffer before his usual meltdown. Cut off because they know he’s not competent! How can this guy be expected to run the country if he needs to be handled for a simple TV interview?”

One thing is definitely clear to almost everyone — Biden can’t handle tough interviews so his handler always tries to ensure that he only gets softball interviews. It’s quite unfortunate to see that Mr. Biden still faces challenges despite the simplest interviews.

During an interview, Trump was questioned about Joe Biden’s competence — as the Democratic nominee continues to lead in polls ahead of him on the November 2020 election. He said, “Let Biden sit through an interview like this, he will be on the ground crying for mommy. “He will say, ‘mommy, mommy, please take me home’,” the US President said, adding that Biden can’t do an interview as he is incompetent.

Biden was asked whether or not he would “re-engage” with Cuba as president. Biden apparently saw this as an opportunity to compare Hispanics with black Americans on the subject of diversity.

“Yes,” Biden responded, “And by the way, what you all know, but most people don’t know, unlike the African American community, with notable exceptions, the Latino community is an incredibly diverse community with incredibly different attitudes about different things.”

After being apparently scolded by the Democratic party, Biden attempted to make amends for his comments late on Thursday night by tweeting out: “Earlier today, I made some comments about diversity in the African American and Latino communities that I want to clarify. In no way did I mean to suggest the African American community is a monolith—not by identity, not on issues, not at all.”

“Throughout my career,” he continued, “I’ve witnessed the diversity of thought, background, and sentiment within the African American community. It’s this diversity that makes our workplaces, communities, and country a better place. My commitment to you is this: I will always listen, I will never stop fighting for the African American community and I will never stop fighting for a more equitable future.”

Many people doubt that Biden wrote this and figured his handlers did because it came out so quickly.

Biden’s gaffe comes just one day after the former vice president gave a bizarre, incoherent response to questions about his cognitive well-being, including asking the black host if he was a “junkie”

“No, I haven’t taken a test,” Biden shot back. “Why the hell would I take a test? Come on man, that’s like saying, you, before you got in this program, if you take a test where you’re taking cocaine or not, what do you think, huh? Are you a junkie?”

“What do you say to President Trump, who brags about his test and makes your mental state an issue for voters?” the host pressed on as Biden laughed.

“Well, if he can’t figure out the difference between an elephant and a lion, I don’t know what the hell he’s talking about,” Biden responded.

“Did you watch that, look, come on man, I, I, I know you’re trying to goad me, but, I mean, I’m so forward-looking to have an opportunity to sit with the president or stand with the president [in the] debates. There’s gonna be plenty of time, and by the way, as I joke with ‘em, you know, I, I shouldn’t say it. I’m going to say something, I probably shouldn’t say.”

Biden concluded, “Anyway, I am uh, I am very willing to let the American public judge my physical and mental fil-fi,,,… fitness.”

And they call Trump a racist and say he is not fit for office???

When the President was asked whether he thinks Biden is senile, Trump replied, “I don’t want to say that. To become a President, you must be sharp and tough and so many other things. He (Biden) does not even come out of his basement.”

Trump challenged Biden with full confidence to take the cognitive test that recently administered to the President. “I can guarantee you that Joe Biden could not answer those questions,” he said, adding that he answered all questions correctly.

Yes, Joe Biden is weak and would be DANGEROUS for America. As usual, the liberal media refuses to tell the truth about Joe Biden and the corrupt policies he’d implement if he was President. Like always, THEY ARE LYING TO US!