Former US Official Threatens To Blow Up ‘Spygate’

A former U.S. government official who studied at the University of Cambridge under FBI informant Stefan Halper says he has the goods to expose “Spygate,” the term that President Donald Trump coined for the intelligence-gathering activities against his campaign.

Steven Schrage, who served as a deputy assistant secretary of state in former President George W. Bush’s administration, alleges that Halper used his position at Cambridge to force him to research Trump associates in 2016 under the guise of working on his dissertation.

“I definitely believe he used his position of power to keep me silent and stretch out my research as well as having me research things to support his activities,” Schrage told the Daily Caller News Foundation of Halper.

“I believe that beyond a shadow of a doubt and have hard evidence supporting it.”

Schrage, who worked on his Cambridge Ph.D. from 2013 through 2019, first came forward to discuss Halper on Sunday in an essay and an appearance on Fox’s “Sunday Morning Futures.”

Schrage said he plans to release information about Halper and other Cambridge luminaries, including former MI6 chief Richard Dearlove. He said he believes that the “real smoking gun” in the Trump intelligence operation is what went on at Cambridge.

In his essay, Schrage teased information from August 2016 that “should have immediately ended their investigation alleging Page was a master spy linking top Trump officials to Putin.” At that point in time, the FBI was ramping up its Crossfire Hurricane investigation into several Trump campaign aides, including Carter Page, George Papadopoulos and Michael Flynn.

A Justice Department inspector general’s report said that FBI agents first met with Halper on Aug. 10, 2016 to discuss using him in the Trump probe. The report said that Halper covertly recorded Page during a meeting in Virginia on Aug. 20, 2016. He taped Papadopoulos during multiple meetings in London in mid-September 2016.

Schrage has so far been hesitant to provide specific dates or documents that will shed light on his interactions with Halper, though he says to stay tuned.

“There is a lot more information that will be coming out,” he told the DCNF in a phone interview.

Schrage is who organized the July 2016 political conference where Carter Page first met Halper, he says.

His involvement in setting up the forum, which Madeleine Albright, former President Bill Clinton’s secretary of state also attended, has led to speculation that Schrage worked with Halper to lure Page over to England as part of an FBI spy operation.

Schrage’s sudden apparition in the press has also stoked skepticism among some Trump supporters who have questioned why he laid low for more than two years after Halper was outed as an FBI informant.

Schrage says that he remained out of the spotlight so that he would not tip Halper and others off to the information that he had.

“Talking would have helped me and my family avoid smears, but hurt the mission of catching those behind it,” he says.

Schrage denies knowing that Halper was serving as an FBI informant until 2018, when Halper was identified as a confidential human source (CHS) for the bureau. Schrage’s invitation to Page was reported soon after Halper was outed.

“I had no idea he was spying on Trump officials,” Schrage told the DCNF of Halper. “By every indication he was doing all this to revive his own career by ingratiating himself to the Trump team, which it now seems clear that he was, just for a hidden purpose.”

Schrage says that he invited Page to Cambridge in order to have someone from the Trump campaign represented at the Cambridge forum.

Page, who is releasing a memoir later this month, has told the DCNF that he maintained contact with Schrage after the Cambridge seminar. He has also said he does not believe that Schrage was involved in Halper’s work for the FBI.

Schrage has released some evidence showing that Halper displayed interest in Flynn. He aired audio on “Sunday Morning Futures” of a conversation he said he had with Halper on Jan. 10, 2017 discussing Flynn’s future role in the Trump administration.

According to Schrage, Halper told him that Flynn was “fucked” and that he didn’t think Flynn was “going to be around long.” 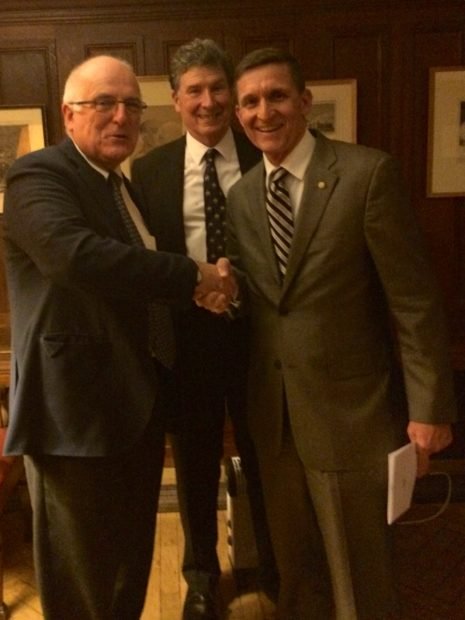 In his essay, Schrage also cited an earlier conversation he had with Halper at an unspecified date in which he told the professor that Flynn was “indispensable” to the Trump campaign and that removing him would be like “decapitating” the campaign.

“I had no idea I had been unintentionally aiding a spy preparing the guillotine and helping lead Flynn to exactly such a beheading,” wrote Schrage.

The University of Cambridge, its staff and students have stayed silent amid revelations about Halper.

Prior to Schrage coming forward, only Svetlana Lokhova, a former Cambridge researcher, has blown the whistle on the activities of Halper and other Cambridge figures.

Lokhova, who was born in Russia but is a British citizen, says she was collateral damage in a smear campaign against Flynn that centered around his visit to Cambridge in February 2014, when he served as director of the Defense Intelligence Agency.

Stories about an allegedly lurid encounter between Lokhova and Flynn first appeared in an essay that Christopher Andrew, Lokhova’s Cambridge mentor, published in the Sunday Times in February 2014. The Wall Street Journal and The Guardian reported the following month that Flynn’s interactions with Lokhova drew the attention of U.S. and British intelligence agencies.

No evidence has emerged to support the allegation of improper contacts between Lokhova and Flynn. And a Pentagon aide to Flynn told The Journal for its story that he did not see anything suspicious during the Cambridge event.

Schrage said that he was not aware of any rumors regarding Lokhova. He also said he did not hear of anything derogatory regarding Flynn until after the conference he hosted in 2016, more than two years after Flynn visited Cambridge.

“No rumors of any impropriety involving Flynn that I was aware of until after my conference,” he told the DCNF.

Christopher Steele, the former British spy who wrote the anti-Trump dossier, also peddled salacious rumors about Flynn that appear similar to those floated about Lokhova and the 2014 Cambridge event.

Steele, who studied at Cambridge in the 1980s, told David Kramer, a former State Department official who gave the dossier to BuzzFeed, that he heard a rumor that Flynn had an extramarital affair with a Russian woman in the United Kingdom.

An unidentified FBI informant also shared the rumor with the bureau at some point in 2016, according to a Jan. 4, 2017 memo regarding the Flynn investigation.

Dearlove, Halper and Christopher Andrew, the mentor to Lokhova, operated the Cambridge Intelligence Seminar through late 2016. Schrage says that Halper and Dearlove also approached Page at his political symposium, which was held from July 10-12, 2016.

“Halper seemed to put Dearlove on a pedestal, and he seemed to be the most important person to him at Cambridge,” Schrage told the DCNF.

Dearlove is also a link between Halper and Steele.

Steele, who was a top Russia officer at MI6 through 2009, reportedly briefed Dearlove in late 2016 about his investigating of Trump associates. The Washington Post has reported that Dearlove advised Steele to provide his information about Trump to British and U.S. authorities.

Whether Halper and Steele were aware of the others’ activities is unknown.

Halper and Steele may have another connection through Vyacheslav Trubnikov, the former head of SVR, Russia’s foreign intelligence agency.

Trubnikov appeared at the Cambridge Intelligence Seminar, where Halper was co-convener, in 2012 and 2015. And FBI transcripts show Halper boasted about his links to Trubnikov over drinks with Papadopoulos in London on Sept. 15, 2016. As part of his FBI cover, Halper paid Papadopoulos $3,000 to write a paper on the energy industry in the Middle East.

Trubnikov may have been an indirect source for information in Steele’s dossier. Steele’s first dossier memo, dated June 20, 2016, cites a former Russian intelligence officer who said that the Kremlin had blackmail material on Trump. Notes from Steele’s Oct. 11, 2016 meeting at the State Department identify Trubnikov as a source of some sort, though it is not clear what information he might have provided.

Halper also hosted his own FBI handler, Steven Somma, at the Cambridge Intelligence Seminar in 2011.

The Justice Department inspector general’s report criticizes Somma (referred to as “Case Agent 1”) as being “primarily responsible” for many of the errors in the Crossfire Hurricane probe. The IG report said that Somma took over as Halper’s handler in 2011 after the FBI briefly cut ties with Halper over his “aggressiveness” towards his previous handler. The report also said that Halper showed “questionable allegiance” to the target of an ongoing intelligence probe.

Somma was central to several aspects of Crossfire Hurricane. In addition to working as Halper’s handler, Somma was the first agent at the bureau to propose surveilling Carter Page. He also took part in interviews in January 2017 with Igor Danchenko, the primary source for Steele.

The IG report criticized the interview participants for failing to disclose that Danchenko undercut the reliability of Steele’s information.

The IG report also pins blame on Somma for withholding exculpatory evidence from Halper’s covertly recorded conversations with Page and Papadopoulos. Both Trump aides indicated that they had no knowledge of Russia’s election interference, but the FBI failed to disclose those denials in applications to surveil Page.

Cambridge has repeatedly declined comment regarding Halper’s activities at the school. The few Cambridge faculty and students who the DCNF has reached have declined comment on anything related to Halper or Dearlove. The Washington Post reported in June 2018 that Cambridge personnel were instructed to not discuss Halper or any of his activities.

Halper’s lawyer did not respond to a request for comment about Schrage’s comments.