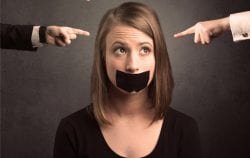 When local and state government officials outwardly reject the notion to protect the Constitutional rights of the people in their cities and states, then the federal government not only the right, but a duty to step in and do what these left-wing cowards are afraid to do.

Another day goes by where the major networks continue to remain silent, as the ambivalence persists throughout the nation. Christian monuments continue to be desecrated or destroyed, riots continue, while citizens are being held hostage by anarchists within their own cities. The silence from their local and state government officials is so loud it can be heard though out the world. Racial tensions are mounting and yet people remain silent.

We have come to realize that free speech is not free and the first amendment applies only to a select few. We live in a subversive atmosphere. Those who try to speak out against what is happening are silenced by  black supremacists, marxist thugs, politicians, and other who seem to enjoy their reign of terror.

Americans are well aware that no one is safe, or free, from the trepidation. It is clear that racism and discrimination overshadow all that we thought was good the world.  We have been brainwashed and silenced during while process of being labeled as racists grew.

The very people you thought were here to protect you, to protect your rights, have high jacked your very existence, to the point where now any law abiding citizen is subject to humiliation, shamed, in an attempt to force them into compliance.

Decades of hatred have been brewing under the disguise of tolerance. The indignation has destroyed the moral fiber of America.  Ironically, the virus has created the perfect atmosphere to instill fear and control into the minds of individuals who are normally caring, forgiving and accepting of all people. The vast majority are not by nature discriminatory in any way, rather they show compassion to a fault. The good nature and willingness to do what is right has become the line that that draws the division you see before you.

You must undo your “whiteness” is a common theme these days, it is now out in the open for everyone to see and hear. They scream it from the rooftops like banshees in the wild, but if anyone were to say, “ You must undo your ‘blackness” well, that would be racist.

No one speaks out about the discrimination and racism against white people. Why is that?  The whiteness propaganda is spreading like the wildfire. The people who knowingly promote this scandalous behavior seem to enjoy wallowing in their own cesspool of self-righteousness. Currently there is only one viewpoint allowed and you’re either for it or you against it. If you are latter watch out they’re coming for you.

The racism you see before you is spreading throughout Corporate America. Has moved openly through places like the Smithsonian, the Federal Reserve and so on. Whiteness sensitivity training is promoted as necessary at work, in schools, and even in public. In what world is this not racism?  To be white, which is currently the rhetoric being drilled into the minds of society, is a crime requiring a public apology.  Why no one calls it out for what it is, is appalling.

It is common knowledge that Antifa and BLM and others are world-wide marxist groups who spread hate, propaganda and instigate violence. Anyone who gets in their way is trampled.  If you are a conservative, or white, your views are silenced, or you are called racist for attempting to stand up to the very people responsible for spreading the hatred.  You have now become the enemy of the state and the rules are changed to suit the demands of the terrorists and not the law abiding citizen.

The First Amendment is not allowed for you. Anyone who speaks up becomes a target of vengeance, unlike anything ever seen before. They will find you, they will publish your private information so you can be shamed or terrorized into submission. They use intimidation and threats. They will find out who employer is, get you fired and then destroy any hope for future employment. They will do whatever they feel is necessary to silence you, the same way they are trying to silence, and remove, the president of the United States. No one is safe. Do you understand that? It’s real. This is no longer about civil rights, Floyd, or anything remotely connected to those things. This is a takeover. You need to know and understand that, you need to realize what it truly means for everyone in America because no one is safe; including the idiots placating these groups.

Antifa and BLM are supported financially by cowards within corporate America. They open their wallets unconditionally in support of these hostile individuals. You know who they are, Amazon, Nike, etc, etc to name a few. They preach about how much they despise oppression and subversion.  They claim to be against all racism and so on. They have incorporated ‘whiteness’ into sensitivity training to prove to everyone how truly noble they are. But while they run on their self-righteous band wagon, they continue to outsource work to countries like China where discrimination, slave labor and sub human treatment are all prevalent in the work place.  They essentially grow rich off the slave labor they claim to abhor. Such hypocrites.

The true essence of hate is what you see before you in these cities and states ran by democrats. This particular group of cowards, has an allegiance with the terrorists, rather then with the people they swore an oath to protect, and yet, one can’t help but wonder if their constituents will reelect them the next time around? The same progressive, anti-American politicians destroying America, and misleading the public, are same people who are allies with the deep state. The CEO’s of corporations appear to be picking their sides.

One would think, at this point anyway, living in destruction, filth, and chaos, accompanied by violent crime, would be enough for any sane person to distance themself from those people who clearly support it. We’ll see. As crime continues to rise in those cities, gun legislation has made it impossible for law abiding citizens to defend themselves, meanwhile, the dictators controlling them have massive security put in place to protect them, their families, their property, all at taxpayer expense. Ironic isn’t it? And no speaks out about this either.

The one sided democracy we see before us today, is the direct result of the complacency we have allowed to go on for decades. The silent majority, if such a thing even exists, needs to stop being silent. They need speak up against the racism that continues unchallenged. They need to voice their distain against the riots, looting, takeovers, crime. They need to put and end to the government control and stand up for their constitutional rights.  They need to do everything in their power to support and build up the moral of all law enforcement agencies, in an effort to restore law and order in every community. They also need to realize the power comes from the people, by the people and for the people.  Now, more then ever they need to come together, all people, united, to put an end to the tyranny. Refusal to acknowledge or to speak up, at this time in our history, will ultimately result in them being silenced forever.