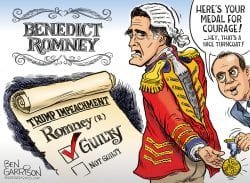 Do you really need to hire a fortuneteller to explain what is happening with the 2020 Democrat Presidential campaigns? Consider this information in preparing for 2020 voting – just don’t tell others why you were so prepared…

The journey begins by understanding the Democrat political failures. Democrats started going the wrong way many years ago but when Donald Trump became our duly elected President, the Democrat Party imploded. Until this time, Democrats never experienced competing with a Republican willing to fight back.

Not knowing how to deal with this issue, their hidden ‘scam box’ was uncovered and unimaginable hoaxes and frauds came pouring out – some legal… some illegal – many even criminal. All the while, they never dreamed the hoaxes and hoaxers would be exposed.

In the forefront of their hoaxes were the Russian, Ukraine, and impeachment. Democrats quickly used taxpayer money to go after President Trump and all of his political supporters. Unapologetic they randomly destroyed and bankrupted many good and decent American citizens who committed none of the alleged crimes.

Today, these facts are being exposed and with the acquittal of President Trump, we find none of their hoaxes succeeded but what’s more important is learning they are backfiring and even uplifting President Trump. It obviously leaves the Democrat Party in shambles with high fever and headaches. So, what’s their next step while their backs are against the wall?

With a guaranteed acquittal in the Senate looming, new plans had to be instigated. The ill-prepared trial by House Managers was a major disaster. Their hope to defeat President Trump in 2020 was also falling apart as the Democrats now painted themselves as a Political Party of losers. Instead of gaining momentum, Democrats began jumping ship – especially minorities, their primary constituents.

Therefore, as Democrats always do, meetings in dark rooms began in earnest. To make matters worse, former Democrat leaders were going public to complain and demand the Democrat Presidential Clown Car be destroyed and replaced with a viable candidate.

With the heat turned up in the kitchen, the DNC is focused upon ways to a ‘do-over.’ Otherwise, their train is never going to arrive at the Presidential station in November. DNC leaders return to the kitchen where they create new recipes, change the decor, and new servers go before the people to announce their new menu.

Their new staff is forbidden to bring up their former stale and rotten food previously served that had only sickened the American voter.  Instead of the normal Democrat extreme politics focusing on the destruction of America, they will insincerely promote Godliness, pro-America, family, love, kindness, church, jobs, wages, taxes, healthcare, and singing Kumbaya.

Well, a major problem remained because Democrats didn’t have a ‘barker’ able to attract voters with these new talking points. After all, up until this point Democrats referred to such talking points as being a Republican. Now the new Democrat Party must find someone comfortable and able to sway voters to return and sink their teeth in the new food choices.

It became apparent they would have to go outside of the Democrat Party to find this special someone because the existing leaders had become too radicalized. Thus, before the impeachment hearings concluded, they had to find a Republican ‘light’ willing to join their new crusade. Their focus was upon a Republican focused upon power and money like Democrats.

Once the Republican Light was identified, agreements were reached and that Republican voted to impeach the duly elected President of the United States to seal the deal. It was all orchestrated and approved before the vote or he wouldn’t have done it. He knew and admitted voting for anything fraudulent within the Republican Party would be an instant death knell.

The negotiations between the Senator and the Democrats were the justification for his so-called ‘sleepless’ nights – not the vote. Once he realized his dream of running and possibly being elected as President of the United States, nothing else mattered. With the Democrat Party money, corrupt hoaxes, and the media sycophants behind him, it should be an easy win.

Yes, he will attempt to convince voters he had to make a stand for Godliness, goodness, and love for his great Country. He has no choice but to expose all of the Republican sinners. It will become a race between the Saint and Sinner.

The one thing we already know about this Senator is he is money and power driven. Yep, sounds like the perfect pre-qualifications to become a Democrat, right. Yes, the Democrat menu has changed and the new server is not only a candidate – he is a Saint. The rebranding of the Democrat Party would be instant and a major positive with hopes of gaining the Presidency in 2020.

This single change eliminates the problems rising from all the sinners currently running for President. The new leader will intentionally never mention what the sinners were promoting until after the election. The sinners will agree to the DNC plan and capitulate to their new Religious Leader.

Once elected, the new Leader understands the DNC will take charge and promote all of the anti-American policies exposed by the current sinners. Again, Democrats only want power and money – nothing else matters, so it meets the approval of their new former Republican Senator.

Does anyone with such arrogance remain in an environment where he will be shunned and belittled for not being able to recognize truth and fact? Will his opinions ever be solicited or wanted? By accepting the Democrat’s offer, everything changes for him. There is nothing else to think about, is there?