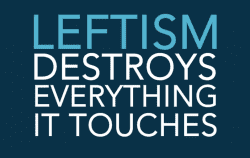 Have you ever noticed the real modus operandi of Liberals? First, liberals expect everyone to believe they are the smartest person in the room – regardless of whether it is a discussion about brain surgery or playing checkers but void of any professional background in the topic. Next, they falsely believe others truly care about what they think. Finally, differences of opinion are angrily excluded and pivot to personal attacks on the messenger.

Have you also noticed the similarities between liberals to oligarchs’ from banana republics, Muslims, Communists, and Socialists Countries? If you don’t understand this critical link, it’s time to become educated because liberals have no lesser goal than to rule the earth! Power and money cause them to do whatever it takes – ethics be damned!

Yep, when elites speak, everyone must listen and obey – end of story. Other’s opinions are worthless to them! If we persist with opinions in opposition, liberals believe it is their obligation to smear and punish us until we become obedient members within their immoral society. If that fails, then it’s get the messenger by falsely branding them with ‘F-Words’ as they begin the destruction of our reputation.

In today’s crazy ‘everything political’ environment, the only sensible resource to rely upon is our Bible. God’s word solves millions of arguments and problems with only understanding a few words.

As an example, Scribes (liberal elites who transcribed, edited, and interpreted the Bible into other languages) approached and attempted to ‘trick’ Jesus by asking: “Which Is the First Commandment of All (meaning of all the Scriptures, which one is the most important)?”

Matthew 22:34 When the Pharisees heard that Jesus had silenced the Sadducees (Members of a Palestinian sect, consisting mainly of priests and elite aristocrats during the 1st century b.c. to the 1st century a.d.. They differ from the Pharisees chiefly in their literal interpretation of the Bible, rejection of oral laws and traditions, and denial of an afterlife – Heaven, and the second coming of the Messiah, even Jesus Christ. Jesus did this by exposing and shutting down their lies, fake news, and rumors about Christianity.), they gathered together (like a lynch mob on their way to a hanging). 35 Then one of them, a lawyer (legal scholar), asked Him a (trick) question, testing Him, and saying, 36 “Teacher (demeaning Jesus’ authority and position by suggesting their title was a much higher position in God’s plan), which is the great commandment (number one) in the law (God’s Word)?”

Yes, God’s word addresses today’s liberal theologians and philosophies (Hebrews 13:8  Jesus Christ is the same yesterday, today, and forever). After years of being on the wrong side of every issue, liberals remain dedicated to their insane philosophies and superiority of their efforts to reign supreme. Nothing changes for liberals because it is not possible for them to be humble or apologetic for being wrong.

Imagine how very stupid today’s Democrats must feel about running a Republican and Communist for President! The Democrat Party has sunk so low they can’t even find a Democrat willing to run for President. We are also starting to see a flood of current Democrat politicians switching their allegiance to the Republican Party.

It’s all because liberals are an ignorant, cowardly, clueless, arrogant association of group-think elites devoid of real world knowledge. There is no ‘out of the box’ thinking with liberals. Truth and fact are rejected and have no home within this group of TDS misfits.

Their quest for living in a utopian society controlled by them is to have the rest of us in chains, starved, without any means of self-protection, and desperate to do anything they demand in return for a bowl of pottage! They despise us because we are not fooled by their phony ungodly antics.

Godliness is antithetical to liberal logic. As we watch the Democrat Party self-implode, it will be interesting to see how long it will take before Democrats become Christian Believers. What choice will Democrats have when they are forced to accept the fact their Gods have failed them!

It’s clear for most the Democrat Party’s new logo is “American Patriots Are No Longer Welcome!” Meanwhile, Democrat Party leaders along with their media sycophants and Hollywood stars continue driving members into the welcoming arms of the Republican Party.

As a nation, the rest of us must learn to pray for our enemies and obey God’s mandate to ‘love one another.’ Of course, God never intends for us to love a liberal or others as we would our spouses and families, but instead it’s all about ‘impersonal’ love. It means caring about others without the ‘touchy feely’ and wanting the best for them.

No, we never want anyone to be disciplined, harmed, or become victims of any vendetta. If we have any hopes of living in a peaceful world, we must encourage exposing God’s word to liberals. It’s a unique time in world history to have a massive revival of Christianity to influence the lives of those willing to learn to live in peace and fulfill their lives with the sort of joy that only comes through knowing Jesus Christ as our only Lord and Savior.

Acts 2:21 And it shall come to pass that whoever calls on the name of the Lord (even Jesus Christ the only begotten Son of God) shall be saved. Ephesians 2:8 (NKJV) For by grace you have been saved through faith, and that not of yourselves; it is the gift of God (eternal life cannot be purchased or earned)!

Then and only then will liberals understand ‘Government’ is never the answer to issues! Psalm 55:22 Cast your burden (issues) on the Lord, and He shall sustain you; He shall never permit the righteous to be moved (shaken). 1 Corinthians 16:13 Watch (be alert), stand fast (rooted) in the faith, be brave, be strong. Amen

Support Conservative Daily News with a small donation via Paypal or credit card that will go towards supporting the news and commentary you've come to appreciate.
Tags
Democrats liberals The Bible