Top News
Home >> Opinion >> Thank You Democrats for the Best Christmas Ever!

Thank You Democrats for the Best Christmas Ever! 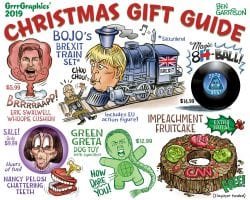 Does any American believe Republicans would have exposed all the corruption in DC and Democrat-run municipalities and States? It’s doubtful that more than a handful of spineless Republicans would ever leave their ‘safe spaces’ long enough to fight for America, right?

Instead, we found overly confident Democrats on the scene exposing it all! What a blessing and a Christmas present wanted by Americans for decades.

Now as the Democrats move forward digging their own graves, Americans will easily understand the real problems in America. They’ll find a Democrat Party steeped in racism, sexism, homophobia, lawlessness, corruption, and lies of massive proportions blaming their feeling on innocents.

From this time forward, Americans can know when any Democrat accuses anyone about anything they do or say, they are themselves the guilty party. Yes, Democrats have proven time after time they are the Party of Liars!

Democrats are plagued with the ‘Trump Derangement Syndrome’ yet worked tirelessly to get him elected as President. What does that fact tell us about their mental stability?

Democrats tell us America is now a Fascist country, but it is only Democrats that want to control our freedom, speech, what we consume, how we travel, and how we live. It is Democrats who tell us the uneducated must pay for the expense to educate elite children.

It is the Democrats that want to take away Citizen rights in favor of forcing American citizens into submission – not a Democracy. Yes, it’s the Democrats that falsely believe a few of their top politicians should be able to rule America by destroying the US Constitution.

If one is a liar, facts are their biggest nemeses. At every turn, the Democrat lies are being exposed by facts and they are going mentally ballistic.

Very elementary laws such as ‘innocent until proven guilty’ now evades the brightest and best of the legal minds within the Democrat Party. Rights to a speedy trial has been swept under the carpet. The right to meet and confront accusers remains ‘secret.’

Democrats falsely believe taxpayer funds belong to them to be spent as they prefer. Consider the wasted taxpayer funds spent on the Russia and Ukraine hoaxes! The answers were before them prior to writing checks into the millions of dollars.

So, America is now coming out of its shell and beginning to see the reality of what Democrats do. For them, it’s all about power and money at the expense of we, the taxpayers.

No, they have no shame or conscience. Today, an ethical Democrat is a total oxymoron, right? Consider the reasoning why the biggest Democrat liars get pushed to higher positions?

Does knowing the Democrat leaders behind the Trump impeachment hoax elude confidence knowing they are habitual liars reporting to a Congressional base demanding the Constitution be destroyed and we move into Socialism?

For those hoping to see justice rendered in all the now exposed criminal acts performed by Democrats, please don’t hold your breath. Most of the Republicans are in the same boat and we know they haven’t a spine.

At this time, Americans can only hope process changes will occur to eliminate another possible overthrow of America. Yes, perhaps a few of the low hanging fruit within the Democrat Party may eventually see criminal charges, but it won’t be the fat cats as Republicans step in to protect them in this storm.

After all, these rats are running around DC every day making it impossible to hide their nefarious activities. What have the Republicans done about it before President Trump was elected?

Consider why the Democrat’s Jeffrey Epstein had the teenaged girls and sex party houses around the world. Was this an accident someone rises from the ash heaps to entertain Kings, Queens, Presidents, First-Ladies, Congressmen, and all other sorts of high-ranking officials?

Finally, the Democrats due to their own efforts have opened deep wounds and are exposing them to all Americans. There is no such thing as ‘Lady Justice’ in DC, because everything there is politically motivated, never fact-based.

We must expect news shows to continue hosting Republicans wringing their hands and saying how awful all these things are, but once returned to the dark rooms on Capitol Hill, it will be business as usual.

On the other hand, Democrats have dug themselves in such a deep hole, it is doubtful they will be able to survive 2020 elections. After all, if Californians have gotten to the point of tossing them out of office, it must be a very bad omen for them nationwide.

Again, thanks to Democrats for the best Christmas ever. You and you alone have accomplished providing the hopes and prayers of the American people by exposing your corruption, lawlessness, greed, and hatred of taxpayers.