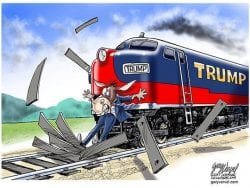 The Captain of our Team has proven to be capable of leading us through all the dark and twisted bombshells tossed out by liberals.

Unfortunately, far too many Conservatives have grown complacent. Instead of getting prepared for the greatest fight in American history for the 2020 elections, many are preparing their favorite den, fattening up for the cold months ahead, and getting set for a long winter’s nap.

Yes, in every dark corner of this world, Liberals and their Terrorist accomplices are scheming and planning to take down our duly elected President, Donald J. Trump, and destroy America.

For decades, millions of man-hours and dollars have been spent to paint a picture that America is not anyone’s friend but She’s the world’s number one enemy – contrary to the facts.

Of course, when it’s not easy to blame America, then their default enemy becomes Israel. Oh yes, the two major democracies supporting personal freedoms around the world are the ‘real’ problems, right? No, it’s not accurate, but it’s life!

Please take a moment to scan these following New Year’s resolutions, add your own, but pick out a few to personally manage this coming year. Then become pro-active and challenge members of your families to follow suit. Please don’t allow your eyes to be taken off the target and stand strong in support of America and Donald J. Trump…

Yes, we must all realize there is so much more needing to be accomplished. President Trump needs and deserves our support for all he has sacrificed, accomplished, continues to do for all Americans.

His loyalty toward us in unquestioned. Please pray for him and his families. Happy New Year!

Support Conservative Daily News with a small donation via Paypal or credit card that will go towards supporting the news and commentary you've come to appreciate.
Tags
Conservatives liberals Politics Politics