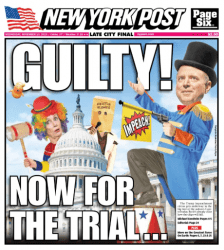 The smells of food being prepared, hearing the yells coming from those enjoying the rides, interactions with the clowns, and watching the children run in all directions trying to capture everything seen; serves to put everyone in a great mood.

It’s always been a part of the Americana and an event that calls the young and old to visit and enjoy. Once attended, the taste for more always remains.

Unfortunately, the circus coming to Washington DC is nothing like this. It’s a circus straight from Russia and no respectable person could ever imagine or want to attend or have more of it. It’s like a tyrannical festival celebrating socialism and communism.

It not only stinks to high heaven, but it turns America’s justice system on its head. The rule of law must be respected, never ridiculed – especially by supposed ‘law-makers,’ right!

Instead of a festive circus, this one is the culmination of actions taken by vigilante lynch mobs. It’s a blood sport event normally reserved by Romans tossing Christians into the lion’s den. Fans gush with cheers watching the lions tear Christians apart, limb by limb.

The Ring Master of this circus lynch mob is a narcissistic congenital liar. Performing in the ring will be the Ring Master’s handpicked elves jumping through orchestrated hoops only they are permitted to access.

The Ring Master has a very long whip to be used to keep opposition, truth, and fact from interfering with the lynch mob’s ultimate goal. After all, no good lynching is possible if opposing details might confuse the hangmen, right?

Then the Ring Master will demand his elves present all their ‘word tricks’ to confuse, malign, and fool everyone. You know, the age-old Democrat tricks of explaining their lies are truth, red means green, investment means taxation, planned parenthood is a valuable service for Blacks, the KKK is here to help, illegal aliens deserve better treatment than citizens, Blacks must not be allowed to vote, and uneducated citizens must pay for the educated.

They will also explain why any opposition to their circus performances is not to be believed since it unfairly criticizes their hypocrisy. After all, lynching’s are reserved for the worst among us and there is no doubt President Trump must be the worst because he demands honesty and transparency from government.

The food served in this Circus is not fit for human consumption. It is years old and stinks to high Heaven. Except for the clowns, just exposing the food will cause others to become nauseous.

When the clowns perform their sleight of hand tricks, their performances won’t go well since we have all seen them time and time again. Same old tricks… different circus.

Taxpayers are getting damn tired of these clowns wasting taxpayer money on themselves. If clowns want to have a lynching, move to Russia where such illegal acts are permitted and encouraged.

Just imagine the arrogance of these clowns believing taxpayers want to spend hard-earned money to put on a side show that is rigged, insulting, and anti-American. To intentionally desecrate our US Constitution on hallowed ground is so disrespectful and dishonoring to all of those who have shed blood, sweat, and tears for this great Nation!

The massive problem for this circus and clowns is when the tents are taken down, what remains? Will there be anything left of the clowns knowing Americans don’t want to see lynch mobs?

How will these clowns ever restore whatever is left of their reputations and find any support from pro-Americans? Running for election in America as an anti-American isn’t going to work.

So, after the tents are taken down, the animals are hauled away, and the clowns remove their makeup, all that’s remaining will be the shame they will have to endure for the rest of their lives. How did it work for Benedict Arnold?

Forced to endure the permanent branding of being a member of a lynch mob is not going to bode well with anyone.

Let’s now unite to say good-bye to this type of circus and never allow it to happen in America, again.

Support Conservative Daily News with a small donation via Paypal or credit card that will go towards supporting the news and commentary you've come to appreciate.
Tags
Congress Democrats Donald Trump impeachment Politics