As the presidential election draws nearer and nearer and things keep changing rapidly, it gives fodder for many theories about what could happen. Bloomberg is thinking about running again if Biden drops out. There is talk of Hillary running again as she keeps popping up with comments and feels she’s entitled to the position after losing twice.

Writer, columnist and free speech advocate Wayne DuPree thinks she’s waiting in the wings for 2020 — and eventually will spring into action to ‘seize’ the Democratic nomination

“Hillary Clinton believes that since her husband was elected president of the United States and she helped him get there — and by some efforts, helped him run the country with her advice — that she’s the obvious choice for the Oval Office as leader of the country,” Dupree theorizes.

Dupree went on to say that A 2020 Hillary Clinton run would be fantastic news for President Donald Trump. In 2016, many people deliberately voted against Hillary. Trump wasn’t Clinton — and that’s what they cared about.

A lot of people have their ideas about what could happen next year, now that former Vice President Joe Biden is vulnerable and heritage-stealing Sen. Elizabeth Warren (D-Mass.) has allegedly become the favorite.

With a level and boring playing field getting too close to the primaries, Hillary Clinton (who’s been strategically getting louder from the sidelines) will enter the race to “save the party” and to “take what she rightfully won.”

Her announcement will be an energetic performance. All of the news outlets will get on board as instructed. They’ll manipulate the polls to make her the “obvious front runner” as they did in 2016.

First Harris will drop — then Booker. Yang won’t get enough screen time from the news, so he won’t do well in the primaries, forcing him to drop out.

It’ll be a “grueling” competition between Clinton and Warren; Clinton will maintain a slight lead throughout the primary

Eventually, Hillary will offer Warren a chance to join forces. Warren will accept and run as Hillary’s vice-presidential candidate. They will go for the “feminist super ticket” angle. And thus, we will end up with a repeat of 2016.

Remember this: Hillary won 57 counties in the entire United States, while Trump won over 3,000. That is why there’s an electoral college. Otherwise, New York City and California would dictate our presidents no matter what the vote. The Founding Fathers were brilliant.

Trump is doing his job the best he can for our country. His problem is that the Democratic leadership won’t let him.They have fought him on everything he has tried to do: safeguard our country, protect legal citizens, and so much more.

All the Democrats have done is spend taxpayers’ money on investigation after investigation of Trump. If anyone needs to “do your job,” it’s these Democratic leaders who willfully neglect their oaths of office.

Now Hilary has taken to calling combat veteran and presidential candidate Tulsi Gabbard a Russian agent.  Clinton took a shot at Gabbard on a podcast earlier this week, claiming she is the “favorite of the Russians” and that they are “grooming” her for the presidency.

Democratic Hawaii Rep. Tulsi Gabbard fired back at former Secretary of State Hillary Clinton on Friday for calling her an agent of Russia, tweeting that Clinton is the “personification of the rot” that has taken over the Democratic Party. “Great! Thank you @HillaryClinton. You, the queen of warmongers, embodiment of corruption, and personification of the rot that has sickened the Democratic Party for so long, have finally come out from behind the curtain. From the day I announced my candidacy, there has been a … concerted campaign to destroy my reputation. We wondered who was behind it and why. Now we know — it was always you, through your proxies and … powerful allies in the corporate media and war machine, afraid of the threat I pose. It’s now clear that this primary is between you and me. Don’t cowardly hide behind your proxies. Join the race directly.”

Hillary has become so unhinged calling former Green party candidate Jill Stein a Russian agent and calling Trump a Russian agent and now Tulsi Gabbard a Russian agent when it was she, Hillary, who had all the contacts with Russia by selling uranium  to Russia for 145 million dollars to her crooked foundation and paying for the fake dossier on Trump through a company that had Russian ties.

Another more fantastic theory circulating around the internet is that Warren will get the nomination and ask Hillary to run as her V.P. since the two have been seen a lot together.  If Warren wins, she will be the victim of an “unfortunate accident” and Hilary will become president. She is a woman of low moral character, who, like her husband, is a pathological liar and thug.  She is also in cahoots with the deep state such as the C. F. R. (Council On Foreign Relations) and a swamp dweller herself who is only out for herself.

Who knows what will happen. Stranger things have happened in the past when it comes to the Clintons. 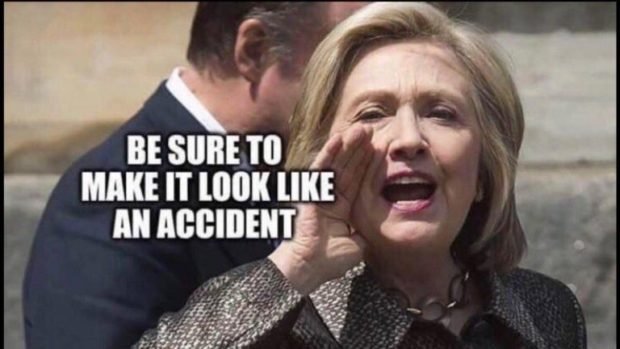 Support Conservative Daily News with a small donation via Paypal or credit card that will go towards supporting the news and commentary you've come to appreciate.
Tags
2020 Election News Hillary Clinton