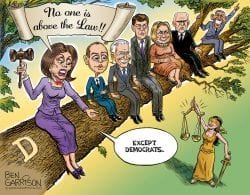 If you are currently living ‘under’ a Democrat controlled government, you must by now understand why they demand power. Yes, they are finally getting the ‘iron fist’ needed to impose their insanity upon the sane.

Excitement among Democrats is swelling, and they are about to burst open publicly with songs of joy if California’s plans are successful. If so, be aware of their movement into a neighborhood near you.

California’s Pacific Gas & Electric announced that it will shut off electrical power to 800,000+ customers in 34 northern, central, and coastal California counties beginning as early as midnight Wednesday.

Of course, Democrats always dangle the ‘shinny bling’ to distract from their real agendas, right? This blatant support for the global warming hoax is no different. Facts be damned full speed ahead!

Even if you don’t keep up with Democrats and their faux outrages, would this ‘black-out’ of counties probably be left or right leaning political strongholds? Don’t have to wonder, do we?

You see, if Democrats successfully shut up opposition then how is it possible to fight back and who will learn about what they are doing? This is a Democrat plan that makes Democrats orgasmic!

Please understand shutting off the power is not just a disaster for ordinary homeowners, but what about businesses, transportation, traffic lights, schools, emergency vehicles, police, post offices, government offices, hospitals, medical clinics, gas stations, and those daily trips to jobs and careers?

Yep, it’s the ‘Green New Deal‘ and not even one vote or need for debate occurred. While most Americans would look upon this as pure government corruption, Democrats see it as their ‘right’ to rule since they know what is best for us!

If Democrats get away with this experimentation, then they will be able to take it to the next level and turn Democrat controlled areas into third-world countries where electricity is not allowed. For Democrats this is a dream come true to manage opposition under the pretext of ‘improving public services.’

Next, let’s ask if this will ever happen to Napa Valley, Hollywood, anywhere in California where the Liberals thrive? Just take a moment to research the ‘Red’ counties in California and know they are now targets of the State.

Does anyone recall the leading Democrat Senator during the Justice Kavanaugh hearings? Senator Hirono (D) says, “I just want to say to the men of this country: Just shut up and step up. Do the right thing for a change.”

In other words, Democrats have no stomach for debate or facts, just shut up and go away! Well, the counties losing their electrical power are now forced to obey – no choices, unless they have their own resources of power.

In the end, wouldn’t this be a major victory for Democrats if Red Counties are unable to conduct their voting responsibilities? Does the real picture finally come into focus? Global warming hoax, green new deal, tyranny, and getting everything Liberals want – without debate or opposition?

Obviously, the Democrats want to mask problems with lies and deceit. Under this ruse of fire hazards, why not simply manicure the forests as America has done for ages to eliminate forest fires? Nope! Can’t do that because it’s successful.

Again, with Democrats there is no room for debate or fact, but we can always depend upon them marching out some insane ‘tree hugger’ saying cutting down trees is murder and trees are more important than humanity, wildlife, and the planet, right?

Power and money are the only issues that matter to Democrats. Doing anything to improve America is beyond the last page of their ‘to-do’ list.

Let’s face reality and understand if Democrats are willing to attempt a Presidential coup d’état facing charges of treason leading to the death penalty, what concerns do you imagine they might have about finding any way possible to turn off power resources to eliminate opposition and achieve their demented goals?

Support Conservative Daily News with a small donation via Paypal or credit card that will go towards supporting the news and commentary you've come to appreciate.
Tags
California Democrats liberals The Green New Deal