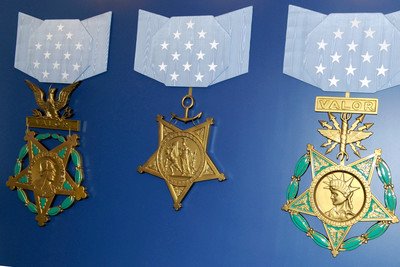 You never know how service members will react in war. Will they freeze up, or push through the chaos?

For World War II Army Pvt. John Towle, it was the latter. The 19-year-old soldier single-handedly took out nine Germans and two armored tanks, saving the lives of his fellow soldiers but losing his own.

Towle was born in Cleveland on Oct. 19, 1924. One of five siblings, he apparently quit high school early to help his family pay the bills.

Towle joined the Army in March 1943, a few months after he turned 18. He volunteered to become a paratrooper and was assigned to the 504th Parachute Infantry Regiment in the famed 82nd Airborne Division. He served in North Africa and Italy before being sent to Europe where the Allies had just gotten a foothold on the continent.

According to a 2015 article in Cleveland’s The Plain Dealer newspaper, Towle wrote about training as a paratrooper in one of his letters home: “Well, the first jump is over, and I landed like a feather. You have no sensation of falling at all. I’ve seen some beautiful things in this world, but, oh brother, nothing can compare with that big, white, silk, beautiful chute,” Towle said.

Towle was only 19 when he made his one and only combat jump. On Sept. 17, 1944, he successfully landed in Holland with about 20,000 other Allied paratroopers as part of Operation Market Garden, the largest airborne operation in history. The goal — to take strategic positions from the Nazis in preparation for the invasion of Germany.

Towle and the rest of the 82nd Airborne spent the next several days battling their way through Holland. Eventually, they reached the town of Nijmegen, where they were able to secure the Nijmegen Bridge over the Waal River.

On Sept. 21, 1944, Towle’s rifle company was in a defensive position on the western side of the bridge when about 100 enemy soldiers, two tanks and a half-track vehicle with wheels in the front and tank-like tracks in the back began to attack.

Towle, who was a rocket launcher gunner, knew it would be a disaster for his company and the entire bridgehead if the Germans broke through. So, without orders, he got out of his foxhole and moved 200 yards through intense fire to an exposed dike roadbed.

From there, Towle was able to fire his bazooka and hit both tanks. They weren’t heavily damaged, but the strikes did make them withdraw. Towle then turned his attention to nine German soldiers who had fled into a nearby house for cover. He shot his rocket launcher, killing all nine.

Towle quickly reloaded his weapon and ran 125 yards through enemy fire to another exposed position where he could get the half-track in his sites. He took a knee and was prepared to fire, but he was hit by a mortar shell and killed.

Towle’s devotion to destroying the enemy saved the lives of several of his fellow soldiers and was instrumental in stopping the enemy attack. For his dedication, Towle was posthumously awarded the Medal of Honor on March 15, 1945. He was buried in Calvary Cemetery in his hometown.

In the decades since his passing, Towle’s sacrifice hasn’t been forgotten. The supply ship USNS John Towle and Fort Bragg’s Towle Stadium were named in his honor. His name is also inscribed on a memorial beside a bridge built over the Waal River, where the 504th was said to have crossed during their trek toward Germany.

How Do I Find Information On a Specific Inmate?

Going Out with a Bang - A.F. Branco Cartoon