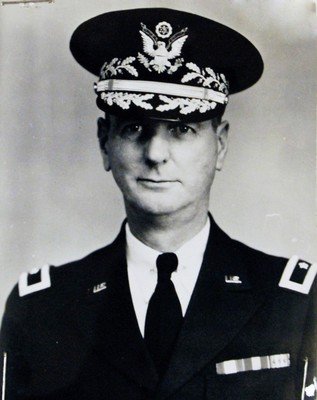 On Sept. 2, 1945, Army Lt. Gen. Jonathan Wainwright, a Medal of Honor recipient, was among the few U.S. military leaders aboard the USS Missouri in Tokyo Bay when Japan signed the surrender documents ending World War II.

Wainwright is lauded for defending the Philippines when they were overtaken by the Japanese and earned the nickname  “Hero of Bataan.”

Born in 1883 in Walla Walla, Washington, Wainwright was from a long line of military officers. He followed in his father’s footsteps by joining the Army and graduated from West Point in 1906.

More than 30 years later, Wainwright was the 4th Army’s commander in the Philippines when the U.S. entered World War II. After the Pearl Harbor attack, Army Gen. Douglas MacArthur — who was in charge of Pacific forces — was forced to flee the Philippine capital of Manila ahead of a Japanese invasion. So, in 1942, Wainwright became senior field commander of U.S. and Philippine forces and was tasked with defending the islands.

The battle for the Philippines was hard-fought and spanned several months. U.S. troops faced starvation, disease and rough jungle conditions after being cut off from supplies. Despite being advised to leave, Wainwright was authorized to continue the fight from the Bataan Peninsula. He fought alongside his men and often visited the front lines of battle.

The Philippines fell to the Japanese on April 9, 1942, but Wainwright and thousands of others survived and escaped to Corregidor, the last Allied stronghold in the island chain. There, they hid and dodged air bombardments for another month.

Wainwright finally surrendered the island to the Japanese on May 6, 1942. He and the remaining Allied troops were forced to join the Bataan Death March to prison camps in the Philippines and on other Japanese-held islands.

Three months later, in August 1945, Wainwright was released from a liberated prisoner-of-war camp. Two weeks later, he stood behind MacArthur on the USS Missouri when the general signed the Japanese surrender documents.

After that, Wainwright returned to the Philippines to witness the surrender of the local Japanese commander.

Wainwright considered himself a failure because he had surrendered, but in September 1945, he was promoted to four-star general and awarded the Medal of Honor. He received a hero’s welcome when he returned to the United States.

After the war, Wainwright commanded the 4th Army at Fort Sam Houston, Texas, before retiring from active duty in August 1947. He died in 1953 and was buried at Arlington National Cemetery. He was 70 years old.

In 1961, Alaska’s Ladd Air Force Base, which had been an Army base during World War II, was returned to the Army and renamed Fort Wainwright.