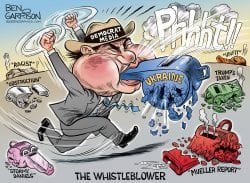 A statement about Democrats has been running around Capital Hill for more years than I have been around. It’s “If you notice a Democrat’s lips moving, it’ll just be another lie!”

Well, we can’t paint that picture with such a broad brush because there may still be a few ethical Democrats left in Congress. However, we all know Nancy Pelosi is not one of them.

The irrefutable fact is Nancy Pelosi is a habitual liar without even a hint of any desire to be ethical! Pelosi is a leader in the Democrat Party with a very rare trait… able to stare into your eyes and lie.

With such a corrupt leader, we must ask, “How can any reasonable Democrat follow a Party leader known to be a habitual liar?”

Is it any longer a secret why Pelosi must expose ‘the daily Democrat talking points’ through her corrupt media sycophants? Regardless of the media outlet, the talking points are identical.

Yes, that’s why we can confirm that most Democrats are liars and/or approve of lying. When dozens of Democrats rush to the TV cameras every morning with identical talking points, knowing it’s a lie, it’s not an accident, right?

After all, doesn’t God have a say in important matters about life, liberty, and the pursuit of happiness…

Exodus 20:1-17 And God mandates these things: I am the Lord your God (not a political party or another ideology). You shall have (place) no other gods before me. I am a jealous (easily followed) God, punishing the children (those who are disobedient) for the sin of the parents (parents must teach Godliness to their children) to the third and fourth generation of those who hate (despise and disobey) me, but showing love (blessings) to a thousand generations of those who love me and keep (obedient) my commandments (teachings). You shall not misuse (use for any personal gain) the name of the Lord your God. Remember the Sabbath day (every day must be a day to worship Him) by keeping it holy (remaining in fellowship through 1 John 1:9). Honor your father and your mother, so that you may live long (disobedience to parents guarantees a short life). You shall not murder (murder is different than killing those who intend harm). You shall not commit adultery (sex outside of marriage). You shall not steal (take anything that doesn’t belong to you). You shall not give false testimony (lie) against your neighbor (others). You shall not covet (be envious or desire) your neighbor’s house (valuables or belongings).”

Most of us are taught before we got out of our diapers to never intentionally lie or commit sins. Now we have a Congress full of liars and sinners! How does that happen?

Oh, I forgot about what the Democrats did in August… in a Democrat Party meeting held in San Francisco specifically removing God and/or Godliness from their Party, officially. However, House Democrats were not to be out done by their Party, so they removed “so help me God” from their oaths.

Democrat Party actions now make it clear we have two major political parties in America: 1) the Godless party, and 2) the Godly party. The 2020 voting should will surely decide if the Democrats are making an appropriate change to their ‘hate America campaign,’ right?

Is being anti-God easily brushed off as something Democrats inherently do? Is this sudden openness about hating God just another notch in their guns or sort of ‘rite of passage’ to take their next step?

When anyone gets far away from God, their lives become nothing but a blur. Suddenly, it’s no longer a life lived to support ‘us,’ but only about ‘what’s in it for me?’

It’s like driving a car using the ‘rear-view’ mirror! Nobody knows where we are going, but we can sure brag and boast about where we have been.

Today, everything the Democrat Party has worked tirelessly to support is no longer a priority. Blacks, Hispanics, Blue-Collar Workers, Liberals, homosexuals, Labor Union Members, and many others are joining the #WalkAway movement. They are fed up with their stupidity!

Everyone is beginning to see the real Democrats turning their backs upon their base voters in favor of illegal aliens, illegal drug trafficking, child sex trafficking, women sex slavery, replacing American workers with foreigners, irrational energy policies, destruction of law and order, destruction of the US Constitution, attacks on law enforcement, and all culminating into the largest hate group ever know!

Who would ever want to be a member of any hate group? Yes, the Democrats tried the KKK, Black Lives Matter, and other evil ways to bully people into voting for them, but how long will that continue to work for them?

For decades, Democrats have had their way acting like spoiled brats, but the momentum is fading. Every time they point their fingers at others, it bites them in the butt when truth and fact are eventually exposed.

For the first time, Democrats are learning the hard way that accusations alone no longer work. We have a new Sheriff, Donald J. Trump, in town that is going to punch back and hit hard.

We can only pray the Democrats will continue to slam their noses into the new Sheriff fists and bleed all over Congress and the TV screens. After all, don’t we always get what we ‘deserve’ – not what we want?

Yes, Nancy’s lips are moving and lying like crazy. It’s time now to feed her more rope and eventually she will hang herself, right?

Support Conservative Daily News with a small donation via Paypal or credit card that will go towards supporting the news and commentary you've come to appreciate.
Tags
Congress Democrats liberals Nancy Pelosi