Can We Keep The Republic? 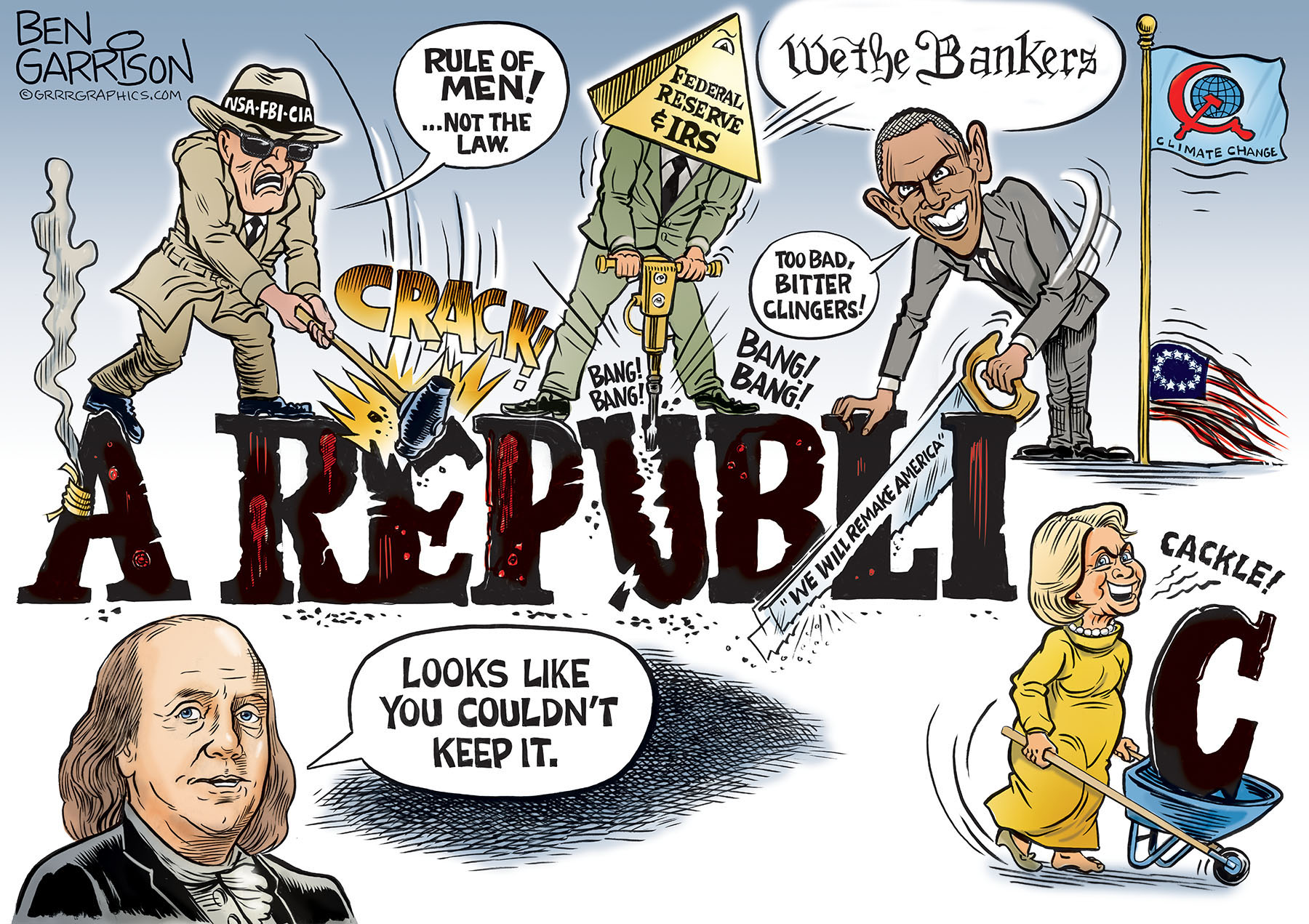 At the close of the Constitutional Convention of 1787, Benjamin Franklin was asked what kind of government Americans had. He replied, “A Republic, if you can keep it.”

Our Republic has not been well kept. The rule of law has been replaced by the rule of corrupt and powerful men and women from the Deep State Swamp.

They control the government, the corporate media, too much of the judicial system, and the security agencies. They use their corporate media to lie to us and control narratives. We conservatives realized they were lying to us, so we found the truth on the Internet. Now conservative voices are being censored. Nothing happens—no push back. Silicon Valley monopolies violate our First Amendment and aren’t punished. Nobody from the Deep State goes to jail. They are all protected.

Biden gets away with gross abuse of his power while the traitors attack Trump who has done nothing wrong.

Since Benjamin Franklin’s alleged statement, our government has grown into a bloated, secretive, and rogue. It has become far more tyrannical than the king we fought to gain independence. Our Republic established a rule of law, which applied to everyone. Government in particular was kept in check by laws established in the Constitution. After the Civil War, the government became more centralized and it began to grow. Teddy Roosevelt was a so-called ‘progressive’ president because big government made a lot more progress under his leadership. He started the FBI, which was soon corrupted by J. Edgar Hoover. Teddy also set the U.S. on a path toward empire. Congress handed over the issuance of our currency to the Federal Reserve in 1913. The Constitution granted that power to Congress, which had no right to turn it over to global bankers. That’s illegal!

The CIA got started under Truman, who feared it could grow into a Gestapo-like outfit. He was right. They can do whatever they like while hiding under the excuse of ‘national security!’ President Kennedy wanted to end the Federal Reserve and break up the CIA. He was assassinated by them. The Deep State has grown by leaps and bounds since then.

The Deep State Illuminati are in control and changing our Republic into a socialist police state. It’s now obvious and in our face. Hillary Clinton, an arch criminal, had the gall to say, “Trump is an illegitimate president” and added, ‘He knows he stole the election in 2016.” Hillary and Obama are the faces of the Deep State. They are also traitors have been planning the ultimate destruction of our Republic for years and they have made too much progress. They’ve made it abundantly clear that they will break any law, tell any outrageous lie, and even commit murder to get their way. And they always get away with it. Now they want to remove a lawfully elected president and they expect to get away with that. Why not? Nobody stops them. It’s outright sedition.

Hold them accountable and Lock Them UP!