It has been confirmed by Interior Minister Aryeh Deri that U.S. congresswomen Ilhan Omar and Rashida Tlaib have been barred entry into Israel.

Interior Minister Deri stated that Israel’s Prime Minister Benjamin Netanyahu supported this action. This comes after Deri suggested that the congresswomen were using their political power “to support organizations that call for boycotts of Israel.”

It was said that these U.S. lawmakers were expected to arrive in Israel on Friday and continue their trip over the weekend. It was noted in the days previous, according to Israel’s Ambassador to the U.S., Ron Dermer, that there would not be denied entry to any member of Congress. According to the New York Post, he said that out of respect of the U.S. being Israel’s ally, the two Democrats would be allowed in.

However, President Trump tweeted that he believed that Israel would “show great weakness” if it welcomed these freshman lawmakers. Shortly after, Deri released the statement confirming that the Jewish state would not accept Omar’s and Tlaib’s trip due to their motives for coming.

It would show great weakness if Israel allowed Rep. Omar and Rep.Tlaib to visit. They hate Israel & all Jewish people, & there is nothing that can be said or done to change their minds. Minnesota and Michigan will have a hard time putting them back in office. They are a disgrace!

These two Muslim Congresswomen have both backed boycotts of Israel and have been actively supporting the Boycott, Divestment, and Sanction (BDS) movement. Their enthusiastic support for the BDS movement means that under Israeli law they can be justifiably banned from entering.

Reps. Ilhan Omar (D-Minn.) and Rashida Tlaib (D-Mich.) are the first two Muslim women who have been elected into Congress. Their unrelenting hostility towards Jews and Israel has been a common theme with their anti-Semitic rhetoric. They have also voiced support on multiple occasions for pro-Palestinian movements which contradict Israel’s sovereignty.

Drawing attention to the apartheid Israeli regime is far from hating Jews. You are a hateful sad man, I pray to Allah you get the help you need and find happiness. https://t.co/SvEXjlxlEN

In July, the House of Representatives passed a resolution condemning the BDS movement which has been heavily supported by both Tlaib and Omar. Both Muslim congresswomen were two of the 17 members of Congress who voted against the motion.

According to reports from the Washington Post, their trip was coordinated by Miftah, a non-profit organization. This is led by Hanan Ashrawi, who is a Palestinian lawmaker. Tlaib is of Palestinian heritage and was reported that a trip to the West Bank was planned for her to visit family.

Prime Minister Benjamin Netanyahu just released a statement on Thursday after the news broke about the denied entry. Netanyahu started by addressing that the State of Israel has an unwavering respect for America and the American Congress. He also made it clear that he embraces critics of Israel but will not stand for the boycotting of Israel.

As for the reason behind Omar and Tlaib being denied entry, he stated, “As a free and vibrant democracy, Israel is open to critics and criticism, with one exception: Israeli law prohibits the entry into Israel of those who call for and work to impose boycotts on Israel, as do other democracies that prohibit the entry of people who seek to harm the country.”

Netanyahu went on to further explain that just a few days ago they were giving the two congresswomen’s itinerary for their visit to Israel. This revealed, “that they planned a visit whose sole objective is to strengthen the boycott against us and deny Israel’s legitimacy.”

The congresswomen listed their destination as Palestine instead of Israel. Also, all previous members of Congress, both Republicans and Democrats, have requested to meet with Israeli officials. However, both Omar and Tlaib broke this tradition and did not request any meetings from members of the Israeli government.

Instead of wanting to bring peace and growth to Israel and the two Democratic Congresswomen made it clear that the entire reason for their visit was to continue to bring more conflict and condemnation to the Jewish state and their people.

Prime Minister Netanyahu ended his statement by saying he would reconsider if the Congresswomen did not promote boycotts against Israel during their time in Israel.

“Therefore, the minister of interior has decided not to allow their visit, and I, as prime minister, support his decision,” Netanyahu stated.

“Nonetheless, if Congresswoman Tlaib submits a humanitarian request to visit her relatives, the minister of interior has announced that he will consider her request on the condition that she pledges not to act to promote boycotts against Israel during her visit.” 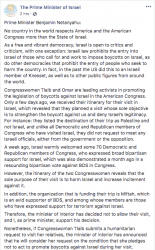 There has been speculation that this denial of entry is going to further strain relationships between Israel Prime Minister Netanyahu and other Democratic leaders in Congress. Many Democrats have lashed out and made known that they are not happy with Israel’s decision.

Presidential candidates, Sen. Elizabeth Warren, and Sen. Bernie Sanders have spoken out and criticized Israel’s choice to deny entry to those who want to boycott them.

However, there has also been avid support for Israel’s decision, and many are calling it justified. David Friedman, the U.S. ambassador to Israel, pointed out that Israel should have every right to protect itself against those who promote boycotts and support harmful movements towards Israel.

If all Omar and Tlaib did was criticize Israel, there being denied entry into Israel could justifiably be seen as inappropriate. Criticism is one thing, totally support for the destruction of Israel and Israeli people is another.

Both Ilhan Omar and Rashida Tlaib have made hateful and slanderous comments about the Jewish state. Their frequent anti-Semitic comments should be a concern to not only Israel but to the American people.

Israel is considered to be one of America’s greatest allies, and allowing U.S. members of Congress to spew hateful rhetoric against the Jewish state continuously is a dangerous precedent.

President Trump and Prime Minister Netanyahu have had close ties over Trump’s presidency thus far. Trump made a historic move when he recognized Jerusalem as Israel’s Capital and opened the U.S. embassy in Jerusalem. As the Trump administration continues to broker a peace agreement, Israel’s relationship to the U.S. only continues to strengthen.

Israel is arguably one of the most hated nations of modern day time. Terroristic threats are an everyday occurrence for this peace welcoming Jewish state. Through their trip itinerary, Ilhan Omar and Rashida Tlaib showed that their motives for coming to Israel are that of continuing their goals in hindering the Jewish state from obtaining prosperity.

After reviewing the facts, Israel’s decision to deny these anti-Semitic American Congresswomen from entering into their country can easily be seen as justifiable.

Originally published at Patriots Of The Lord.