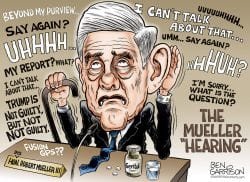 A very wise man stated, “Truth is a force of nature!”

While Democrats and the media despises truth, it always has a way to wiggle through all the barriers and coverups to surface right when it’s least expected. The proof is everywhere and runs throughout history.

However, it couldn’t have been more evident than during the Mueller testimony before Congress. Right before our eyes, we watched the Hindenberg explode, once again.

Unlike the Hindenberg, this wasn’t an airborne vessel but rather an eggshell-thin bag of lies that exploded to leave permanent deep scars throughout the FBI, DOJ, CIA, Multiple Government Agencies, MSM, anti-Trumpers, and especially the Democrat Party.

If tickets were sold, seats for the Mueller hearing would have sold out within moments of the announcement. Similarly, there is no location in the world able to accomodate all attendees.

Fortunately, the Hindenberg was then but the Mueller hearing is now. Americans didn’t have to physically travel anywhere to attend but could relax in our favorite chairs at home to ‘enjoy’ the presentation.

The only problem is that just like the Hindenberg, it was a nightmare. Watching Robert Mueller’s testimony explode was very upsetting – regardless of philosophical opinion.

Despite this, did any of the following points manage to wiggle its way through all the fog, lies, and mischief? If true, shouldn’t these points be investigated…

Should we go any further? Yes, we could but these points are enough to provide a foundation to understand there was a truckload of information dumped by Mueller and everyone is wrongly dismissing it.

The most important point is to question what the DOJ will do with Mueller’s ton of information? Isn’t it about time to take this hoax seriously and punish those involved?

To bring all this information into perspective, let’s ask a few more questions:

Well, we can only hope these issues will be investigated and turned into real or false accusations, right?

Somehow, it’s like knowing where there is smoke, there is fire! Is all this information coincidental?

Support Conservative Daily News with a small donation via Paypal or credit card that will go towards supporting the news and commentary you've come to appreciate.
Tags
Robert Mueller The Mueller Report