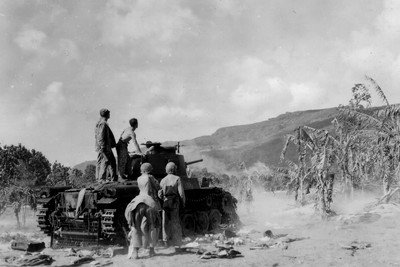 Marine Corps Pfc. Grant Timmerman had already served plenty of time abroad when he was discharged from the military in late 1941. But Pearl Harbor happened five weeks after he got out, so he decided to join right back up.

Timmerman shipped out again for his country a short time later, and he never returned. But the actions he took to save his fellow Marines will always be remembered. They’re what earned him the Medal of Honor.

Timmerman was born in February 1919 in Americus, Kansas, where he grew up playing saxophone, hunting and learning Russian and French. He went to college for a year before moving to California to become a welder.

A few months later, in October 1937, he joined the Marine Corps. Timmerman was shipped to China on the USS Henderson, where he served as a truck driver and motorcycle dispatch rider. An incident in Shanghai during this time earned him a letter of appreciation from a U.S. Navy commander. The commendation came after Timmerman and another Marine found a woman being surrounded by a menacing-looking group, so they dispersed the angry crowd and waited for police to show up. It turned out the woman was the Navy commander’s wife.

Timmerman enjoyed being overseas and extended his tour of duty, but he found himself back in the states by the spring of 1941 and was discharged after four years of duty that October.

However, just five weeks later, the Japanese attacked Pearl Harbor, catapulting the U.S. into World War II. Timmerman reenlisted two months later. By autumn, he was a 23-year-old sergeant being shipped to New Zealand to prepare for combat. He fought at the Battle of Tarawa during the conquest of Betio Island in the Gilbert Islands in November 1943. After getting some rest and relaxation and more training in Hawaii, he was sent back to the Pacific battlegrounds.

By the time the Marines landed in the Mariana Islands to fight for control of Saipan in June 1944, Timmerman was a tank commander with the 2nd Battalion, 6th Marines, 2nd Marine Division.

On July 8, 1944, Timmerman was moving his tank a few yards ahead of his infantrymen, steadily firing an antiaircraft machine gun during an attack on hostile positions. But their progress was impeded by a series of Japanese pillboxes and trenches.

Timmerman stopped the tank as he saw a target he could hit with the tank’s 75 mm gun. He stood up in his exposed turret to warn the infantrymen around him of the gun’s muzzle blast, telling them to hit the deck.

Right then, a Japanese grenade flew toward his open turret. Thinking quickly, Timmerman shielded the opening with his body and took the brunt of the blast to his chest. He was killed instantly.

By blocking the grenade, Timmerman saved the rest of the tank’s crew. His sacrifice earned him the Medal of Honor a year later, on July 8, 1945. The medal was presented to his parents in their home during a quiet, informal presentation they requested.

Timmerman was initially interred in a cemetery in the Marianas, but he was moved and reburied at the National Memorial Cemetery of the Pacific in Honolulu.

The USS Timmerman was named in his honor in 1946. Christened by his mother, the destroyer was used from 1952 to 1959. At Marine Corps Base Quantico, Virginia, Marines who have followed in his footsteps might recognize his name when they venture down Timmerman Street, behind the base commissary.