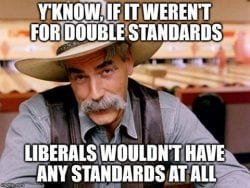 The common thread running through Democrats and their legislation is always fixated on fear and emotions – never facts. After all, while Democrats sit peacefully in their rocking chairs knitting blankets for babies they are about to abort, what are Republicans doing?

Well, if we get into the minds of Democrats, we learn Republicans – especially Christians and Jews are terrorists. Everything any Republican says or does is racist, homophobic, xenophobic, and hate speech.

The sycophant Democrat media jumps on board and runs with all these fake news stories 24/7 non-stop. At the end of the week, the media holds their award ceremonies announcing they have made immense contributions to society and award each other trophies.

Meanwhile, Republicans have crawled under their beds and are too afraid to speak. Instead, they shake in their boots and refuse to confront the lies and propaganda.

“After all,” Republicans say sheepishly, “President Trump may have done all these things, but we don’t approve of it!” Of course, they know wounded leaders dampen all hopes of a clear victory.

Regardless, their goal is to shove the blinding spotlight away from them, right? Plus, they know the media is all to willing to perform colonoscopies on President Trump.

Democrats and their media accomplices know Republicans haven’t any tolerance for confrontation – much less a fight. That’s why they have no reasons to relent on their false claims and attacks.

If Republicans are eventually able to put their leg braces on and stand before a news camera, they apologize, speak in platitudes, and meekly ask everyone to be nice. All responses are void of any fire in their bellies or desire to correct the record!

My parents taught me not responding or not answering is a response. They also taught me the critical lesson to be learned from Martin Niemoeller about Political Parties lusting for tyrannical government power and control like today’s socialist Democrats…

How else can anyone explain how the Democrats treat Blacks and get away with it? Democrats create the illusion Republicans hate Blacks and are racists. Does anyone hear Republicans counter such lies?

No, Democrats have no shame. Unfortunately, Republicans are unashamed and have no spine for setting the records straight.

The only way the Democrat dilemma is going to be fixed is to severely defeat them at the voting box to the point they become powerless in Congress.

The only way the Republican dilemma is going to be fixed is by voting them out of office and replacing them with Patriots – someone that loves God and America more than themselves. Someone that is unapologetic to put America first and its citizens before illegals.