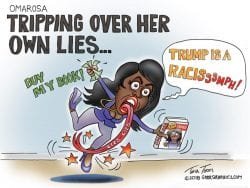 My Parents always taught that it’s not man we need to fear, but God. Unlike man, God sees and knows everything we say or do. Then they would end the conversation by saying, “There is no hiding from God, regardless.”

This was a great message that has made all my family better in our lives in all ways. As soon as anyone would suggest doing anything unrighteous, I opted out of the conversation and departed. Yes, I frequently found I would be targeted as an enemy to the group, but then again, I wasn’t concerned about man, but God.

Such a simple analogy is so easy to understand and applicable to a happy life. I still thank my Parents for their wisdom and dedication to our family when it was not the “in thing or trend” in our neighborhood and schools. Disobedience to God’s plan for our lives guarantees God’s punishment.

Consider how embarrassing it had to be for John Dean in the recent Muller Dossier hearing. As a young man with a recent law degree working for President Nixon, his future was bright and unlimited. Instead, he chose to be disobedient to God and man’s laws ending up losing everything to now live in disgrace.

Many say John Dean is now restricted to a life as an “attack dog liar” for the Democrat Party and the mainstream media. If true, it means he survives by lying and making false accusations. What a total disgrace!

Imagine receiving an invitation to a congressional hearing or media show knowing the invitation is a request to spread more lies and deceit. Obviously, the more he lies and deceives the greater becomes God’s punishment. Awful!

Unfortunately, John Dean is not a unique person within the ranks of those in opposition to President Trump and willing to lie and deceive. There are government agencies, world leaders, Democrats, Republicans, judges, police, governors, legislators, mayors, city council members, business leaders, athletes, reporters, journalists, actors, and the list goes on and on who are not willing to follow God’s plan for their lives.

The larger question is, “How long will God allow such obvious disobedience?”

The point being is we are beginning to see discipline from God upon the disobedient. Those in His crosshairs know very well who they are and their crimes.

Before the judge’s gavel is hammered, they are coming out of the woodwork screaming and hollering with even more lies suggesting they are not guilty while falsely accusing the innocent. Never convince anyone that it is okay in politics, because God will never tolerate such behavior, regardless.

Those guilty of disobedience, will soon fill our courtrooms and news resources with false screams of innocence. All of this could be avoided by following the simple analogy my Parents offered.

Unfortunately, most have reached the point of “no return” and unwilling to repent and surrender their lives to the greater power. If loved ones could minister to them, it would be better for America!