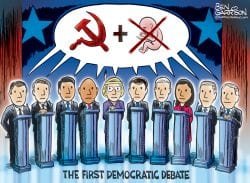 Does anyone remember when Democrats proudly proclaimed allegiance and support for the needs of Blacks, Hispanics, Labor Unions, Poor, and Middle-Class Americans?

Do you also remember when they stood for civil liberties? Did you know they once even supported Christianity and Israel?

Surprisingly, Democrats even supported the US Constitution. Yes, that meant support of the 1st and 2nd Amendments, too!

When it came to homosexuals, they had a firm standing, as well. From the Presidency to the lowest of Democrats, their stand was universal.

It wasn’t that long ago when we could count on Democrats to expose wrongs and fight for justice, freedom, and the American way. Their war-cry was government transparency and innocence until proven guilty!

Boy, those were the days, right? Most Americans we recall those honorable proclamations by Democrats while having civil debates over issues we didn’t agree with.

Unfortunately, those days have long since passed. Sadly, they are not going to return any time soon based upon the recent Presidential debates.

During the Clinton era, Democrats began losing their moral compass. Since then, Democrats are only about power and money.

“To Hell with American’s needs,” so says the new Democrat Presidential hopefuls! Then they console Americans by telling us we must accept their socialist ideologies.

Today’s Democrats aren’t trying to get the ball over the goal line because they have hidden the goal posts. They have lost their rudder and who knows where they will go! It’s ‘to the left flank, march’ for Democrat Socialists!

Democrat leadership is going to have major negative consequences on this party and America for many generations. Isn’t it now obvious they are anti-American everything?

No longer are Democrats pledging allegiance to anything American – especially citizens. Isn’t it hard to believe there could be such an amazing shift in core values in such a very short time?

Imagine believing the American people would be excited about upping minimum wage to $15 but having a 70% tax levied on hourly wages. Basic math exposes Democrat trickery and it only gets worse.

Now, we are at $9.45 per hour or less, depending upon the State and other deductions. Next comes the bigger payroll deduction issue – the costs for the government’s FREE health care costs for illegal aliens!

Imagine with their new minimum wage and benefits for illegal aliens, 100 US Citizens would be forced to provide financial support for around 10,000 illegal aliens. How does that math work? Hmm…

Their plan further includes a ban on policing and imposing US laws on illegal aliens – regardless of criminal activities or history. Yes, Democrats now believe it’s okay for illegal aliens to have free reign ‘get out of jail cards,’ free money, free education, free health care, and free to do as they please.

The obvious result with such a horrific Democrat plan is the rest of the world would move to America. Remember America is the most non-oppressive government in the world. We remain the land of opportunity, freedom, and justice.

Democrats never want to address facts and results; they just want to be heroes for the moment so they can blame others because their plans always fail. Their solution is always throwing more money at the problem.

As a prime example, Democrats are currently flooding the streets of their ‘beacon city’ Los Angeles with homeless families showing America what ‘real’ Democrat Socialism looks like. So far, it’s estimated 65,000+ people live on those streets, but they want and demand more!

In addition, the Democrats are down right ‘giddy’ over all the diseases such living conditions breed. Are they hoping these diseases wipe out Americans?

But wait! Isn’t that actually what Socialism is all about? Socialists don’t want any stinking voting going on. Wouldn’t that ruin everything for them?

Just look at what’s happened in the new Democrat Socialist Venezuela. People voting made no difference. The tyrannical Socialist regime remained in power causing greater harm to all citizens while the elite Socialist leaders dine on caviar and champagne making sure citizens remain unarmed!

Now that we know Democrats have come out of the closet to expose their Socialist addiction, we all must respect that Socialism is the biggest lie ever propagated upon people around the world. It proclaims Heaven on earth… while living in Hell!

Republicans, if you don’t quickly grow a pair and start standing up for America and capitalism – the only system to ever produce so much good, we will all be bowing to Comrade Biden, Harris, or whomever begging for better garbage and sidewalks to live on the street.

Remember God’s plan is perfect, and we must remain focused upon Him who gives us peace and comfort! He is the only primary solution to guide us through this onslaught of Democrat Socialist decadence!

2 Peter 1:1-5 Simon Peter, a servant and an apostle of Jesus Christ, to them that have obtained like precious faith with us through the righteousness of God and our Saviour Jesus Christ: Grace and peace be multiplied unto you through the knowledge of God, and of Jesus our Lord, According as his divine power hath given unto us all things that pertain unto life and godliness, through the knowledge of him that hath called us to glory and virtue: Whereby are given unto us exceeding great and precious promises: that by these ye might be partakers of the divine nature, having escaped the corruption that is in the world through lust. And beside this, giving all diligence, add to your faith virtue; and to virtue knowledge

Support Conservative Daily News with a small donation via Paypal or credit card that will go towards supporting the news and commentary you've come to appreciate.
Tags
2020 Election News Conservative News Democrats Republicans