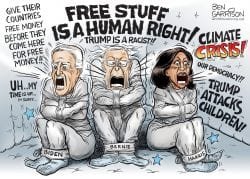 Did anyone else notice what was obviously missing in the Democrat debates? Wouldn’t it have been great if the moderators insisted upon it?

Is it possible to confirm anyone on stage these last two nights were Americans? Does anyone believe they are trying to be the next President of the greatest Nation ever?

Wouldn’t it be more likely to believe these are non-citizens from other countries and a delegation from Iran or the United Nations? The anti-American propaganda was front and center, wasn’t it?

Of course, one could believe they are just naïve or too young and inexperienced to know any better. Unfortunately, that would be a lie. They know what they are doing and have rehearsed and planned it well.

It’s truly a shame because for America to prosper we need ‘healthy’ political debate and challenges. However, the Presidency is no place for anyone that lives in ‘la la land’ or a dedicated Socialist anti-American.

Capitalism cannot co-exist with Socialism. Please do a little research and find just one socialist country that has been successful in providing citizens life, liberty, and the pursuit of happiness.

These Dem candidates are sufficiently educated and have no excuses for failing to “fact check” their words, actions, and positions. If they are not able to perform basic math equations, they have enough money to hire math professionals to assist.

They have nothing prohibiting them from soliciting or sampling opinions and constructive criticism from a cross-section of US citizens. In other words, if one wanted to sell bacon sandwiches in a Muslim country, wouldn’t you first want to determine market viability?

So, are we supposed to believe these candidates don’t understand these basic facts? Of course, they do. Doesn’t it then prove they are not soliciting ‘American citizen’ voters?

Dishonest people just can’t help themselves from continuously putting their foot in their mouth. They no longer have a conscious allowing them to be open and transparent. Their stand changes as the wind blows.

Please search history and calculate the promises made Vs kept, by Politicians. That’s just the way it’s always been until President Trump was elected.

He alone will be renown for keeping campaign promises. On the other hand, Democrats are renown for being liars and deceivers laughing about failure to keep promises.

Many accept the theory Dem candidates are merely going further left. Wouldn’t it be more accurate to accept they are just a bunch of liars that hate America?

Without question, we can all affirm they wouldn’t be recognized as being pro-America, right? Is there just one plan they have that would improve the lives of American citizens? If so, it’s a very well-kept secret, isn’t it?

On the other hand, shouldn’t we also ask which countries would benefit from these Dem candidates? What about Iran, Russia, China, Venezuela, Cuba, and the like?

So far, don’t we have enough proof the Dem candidates hate America worse than these anti-American countries! At their next debate, will they start burning our flag and staging protests chanting, “Death to America?”

To be a successful politician in America, wouldn’t there be two primary requirements: 1) to love God, and 2) to love America and its Constitution?

When we combine these two key ingredients into one-character trait, isn’t that called integrity? Was this critical value ‘accidently on purpose’ omitted from their debates?

What does God have to say to these candidates…

1 Kings 9:4 “And if thou wilt walk before me, as David thy father walked, in integrity of heart, and in uprightness, to do according to all that I have commanded thee, and wilt keep my statutes and my judgments:”

Job 2:3 “And the LORD said unto Satan, Hast thou considered my servant Job, that there is none like him in the earth, a perfect and an upright man, one that feareth (respects) God, and escheweth (despises) evil? and still he holdeth fast his integrity, although thou movedst me against him, to destroy him without cause.”

Psalms 7:8 “The LORD shall judge the people: judge me, O LORD, according to my righteousness, and according to mine integrity that is in me.”

Proverbs 11:3 “The integrity of the upright shall guide them: but the perverseness of transgressors shall destroy them.”

Proverbs 19:1 “Better is the poor that walketh in his integrity, than he that is perverse in his lips, and is a fool.”

Proverbs 20:7 “The just man walketh in his integrity: his children are blessed after him.”