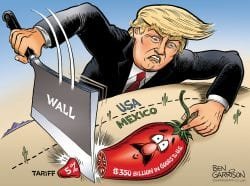 Who should be at the head of the line on their way to the White House to apologize to President Trump? A few that come to my mind are Senator’s McConnell, Barrasso, and Cruz.

Have you noticed what a difficult task it has become for President Trump to drag ignorant Republicans across the goal line? Why can’t the Republicans just follow the lead of those who voted for the President?

When they compare their voters to President Trump, it’s hardly a contest, right? Regardless, Republicans continue to doubt and dodge what obviously works.

Imagine what could be accomplished in America if Congressional Republicans had 1/10th of the spine our President has. Then they wonder why their approval ratings are in the tank!

How embarrassing it must be for Republicans to admit that Andrés Manuel López Obrador, the President of Mexico, has now accomplished more on immigration than they have done, ever! America has never been so poised for greatness as we are today, but Republicans are satisfied with pulling the reins back.

Patriots have never been so ashamed of politicians as they are, today. Democrats want to go full blown socialists and Republicans want to sit on their rears and watch.

If not for President Trump and God, where would America be and where would we be heading?