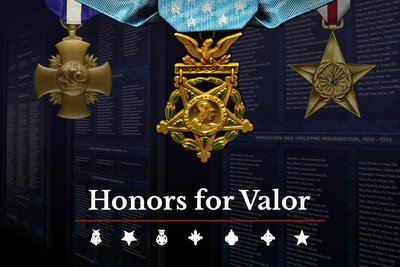 During the Civil War, more than 1,500 men earned the Medal of Honor, which had just been created. Today’s Medal of Honor Monday honoree, Army 1st Lt. Arthur MacArthur Jr., was one of only two fathers who shared the privilege of being a Medal of Honor recipient with his son.

Born in Springfield, Massachusetts, in June 1845, MacArthur eventually moved to the Milwaukee area, where he joined the 24th Wisconsin Volunteer Infantry at the onset of the Civil War.

By the end of 1863, MacArthur was a first lieutenant. On Nov. 25, he found himself east of Chattanooga, Tennessee, with more than 50,000 other Union soldiers during the Battle of Missionary Ridge, where they stormed Confederate defenses.

According to the American Battlefield Trust, it seemed as if Union troops were going to have to retreat back down the ridge to Chattanooga due to heavy Confederate gunfire. But then the soldier responsible for carrying the unit’s flag, known as the standard bearer, was killed. He dropped the flag, which had come with them all the way from Milwaukee.

MacArthur picked it up, cried “On Wisconsin!” and then ran full speed at the Confederates. He was shot twice before planting the flag in the middle of the southerners’ defensive fortifications, the ABT said.

MacArthur’s actions inspired the beleaguered men in his ranks. They surged after him, as did about 15,000 more Union troops, who were finally able to crush the Confederates in their middle. By day’s end, the enemy was retreating toward Georgia, leaving Chattanooga firmly in Union control. The battle was considered the nail in the coffin of the Confederacy.

At the time, MacArthur’s actions earned him a promotion to colonel — a huge deal because he was only 19. Nearly three decades later, in 1890, he received the Medal of Honor.

After the Civil War, MacArthur briefly left service, but he returned in 1866. He spent the next 30 years traveling the nation with the Army, taking part in various military campaigns, including against the Native American Apache leader Geronimo in 1885.

After the Spanish-American War in 1898 and the capture of the Philippine capital of Manila, MacArthur helped establish a new government there. He eventually retired as a lieutenant general in 1909 when he turned 64.

Three years later, on Sept. 5, 1912, MacArthur was ill, but he chose to speak at a reunion of the 24th Wisconsin. According to the ABT, “At the podium he began, ‘Your indomitable regiment …’ before collapsing. Moments later, he was dead. The old men of the 24th wrapped his body in the flag hanging on the wall, the flag he had carried to the top of Missionary Ridge as a teenager.”

The Army legend was buried in Milwaukee but reinterred at Arlington National Cemetery in 1926.

Years later, his son, famed Army Gen. Douglas MacArthur, also earned the Medal of Honor for his actions in World War II, making them one of only two father-son duos to do so. The other pair: President Theodore Roosevelt, who earned it during the 1898 Spanish-American War, and his son, Theodore Roosevelt Jr., who served during World War II.

0
Previous: Review: Godzilla: King of The Monsters
Next: Vietnam Says Some Chinese Exporters Are Using Fake ‘Made-In-Vietnam’ Labels To Avoid US Tariffs