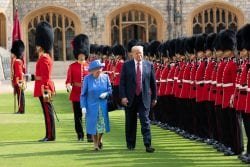 Since CNN has a monopoly, should anyone believe what is being reported about the President’s visit to foreign countries? After years of intentionally lying to Americans and the world, does anyone believe the mainstream media has suddenly ousted the liars and truth will suddenly prevail?

What we really find newsworthy in London is a Mayor – Obama like, who loves to lie and pretend he is God’s gift to the world! Next, his followers marching in lockstep to his commands are Socialist non-Brexit far left liberals seeking handouts from big government.

Starting to get the “real” picture? It’s just another US Democrat production outside of America with nothing but different clowns and children in charge. Add a little booze, drugs, hate, race, sex, and you get the perfect Molotov cocktail for Democrats and Fake Media in London.

It’s all become so predictable, right? Fake media ratings are tanking, and journalists are no longer respected as professionals. Instead, they are only Democrat Party lackeys. What’s even worse is they have started believing their own propaganda and lies!

When one considers the point of President Trump’s visits to Europe, it’s a serious matter for America, England, and the world. Of course, one would need a functioning brain to understand such high stakes decorum.

Do you think the London Mayor and his “globalists” should be protesting the President’s visit or rising crime rates in London? Should London’s soaring murder rate now taking over New York’s be a better concern to protest? What about “no-go” zones where London Police can’t go? What about the drug epidemic? Like US Democrats, only power and money matter!

If President Trump’s visit achieves anything, it is only going to improve the lives of the Mayor and his protesters! So, where are the brains and understanding? Oh yes, it’s just another Democrat rally. No facts, truth, or logic is allowed, right?

The next step is to wait for Fake News to be exposed for doctored photos, paid interviews with socialists, and other ‘miscalculations.’ Can we expect apologies, retractions, or news about the positive achievements of the President’s visit? Please don’t hold your breath!

Yes, the entire world is laughing at the Fake Media, but they are so inept, they still don’t get it. Arrogance is a peculiar affliction. God teaches us against such, but Liberals never want to learn… “Prov 13:5 A righteous man hateth lying: but a wicked man is disgusting, and cometh to shame.”

Just as he does in America, President Trump will rise above all the lies, hatred, and slandering to achieve another victory lap during his foreign visits. He not only has truth and facts on his side, but God loves and blesses a righteous servant of the people! Proverbs 10:6 “Blessings are upon the head of the just…”